This monster block of portland limestone had to be specially ordered and extracted from the quarry carefully. The biggest piece of British limestone sculpted since the days of Henry Moore. It weighed twenty five tonnes and was ultra-sound tested to to confirm its integrity.

This remains the single most complex and interesting piece I ever sculpted. I had the help of a mason called Roger Flann for the duration. 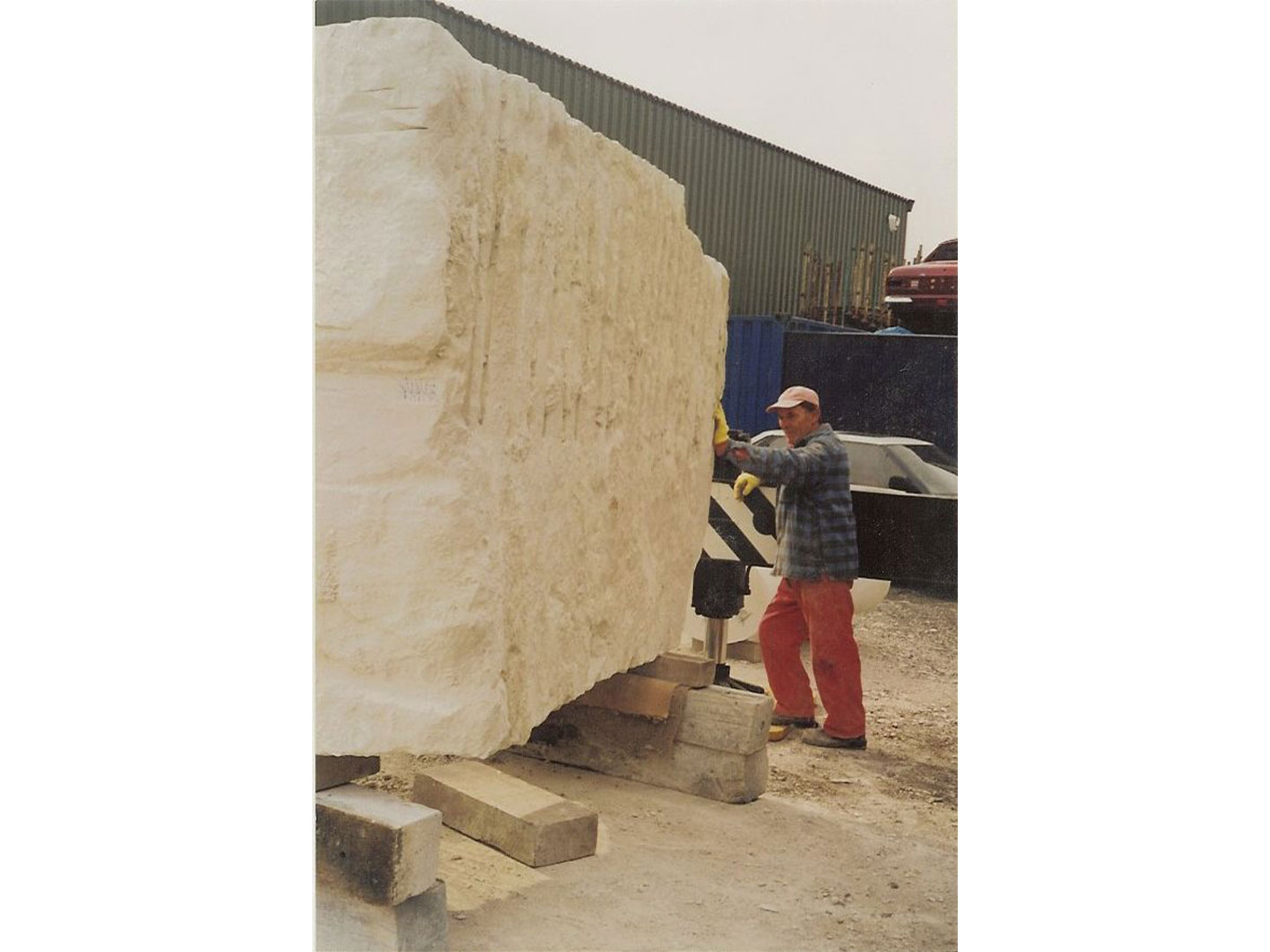 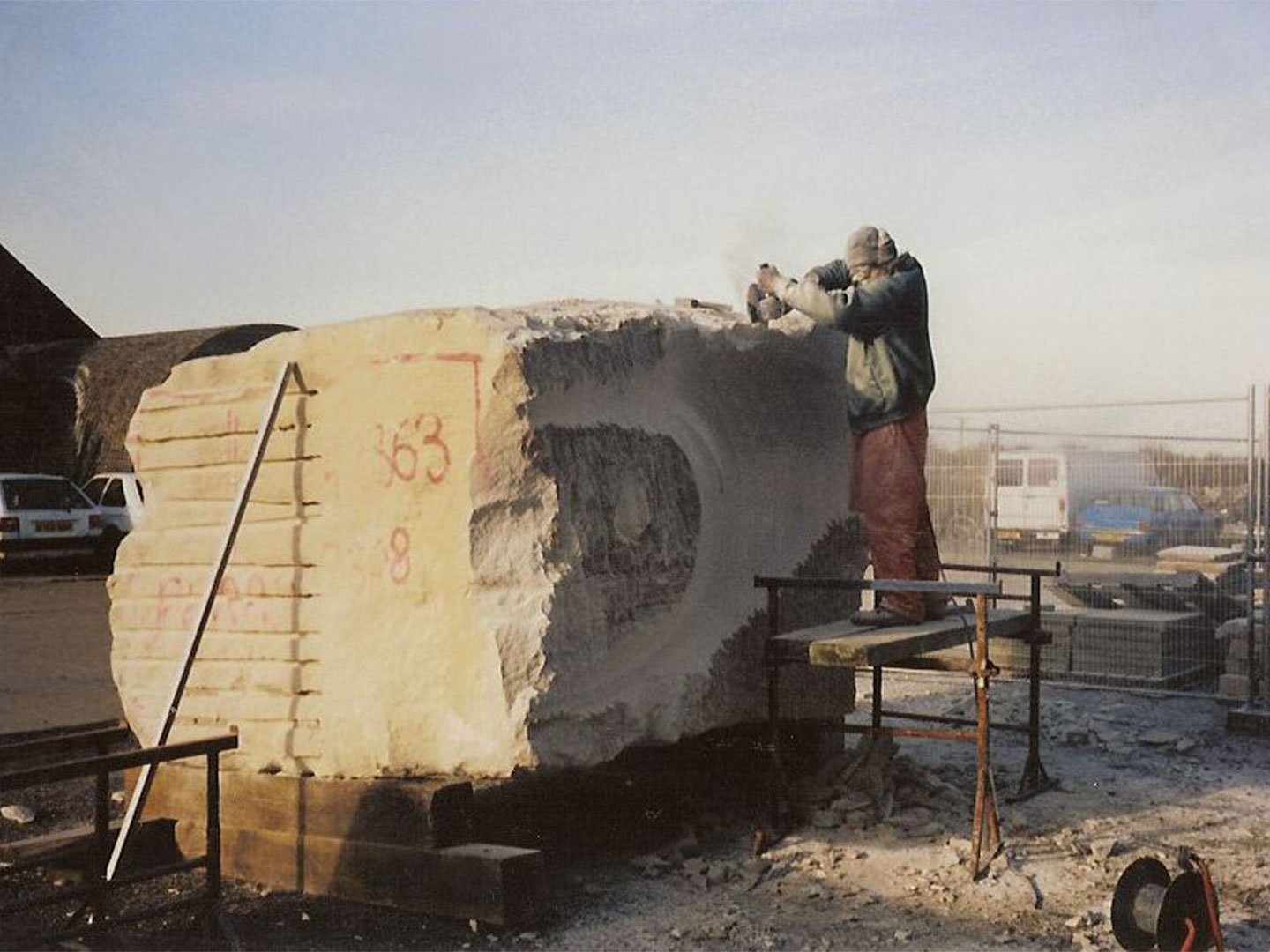 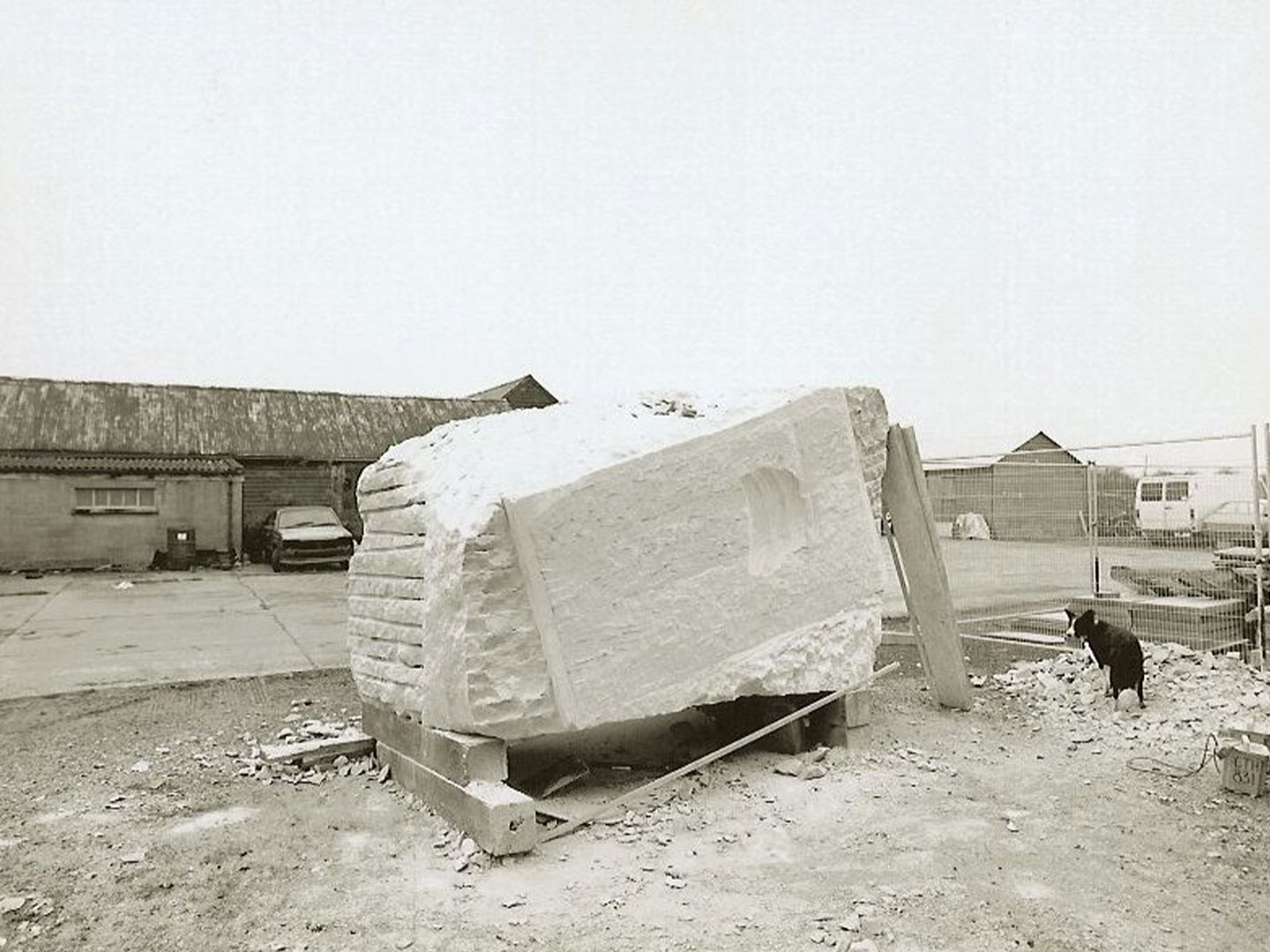 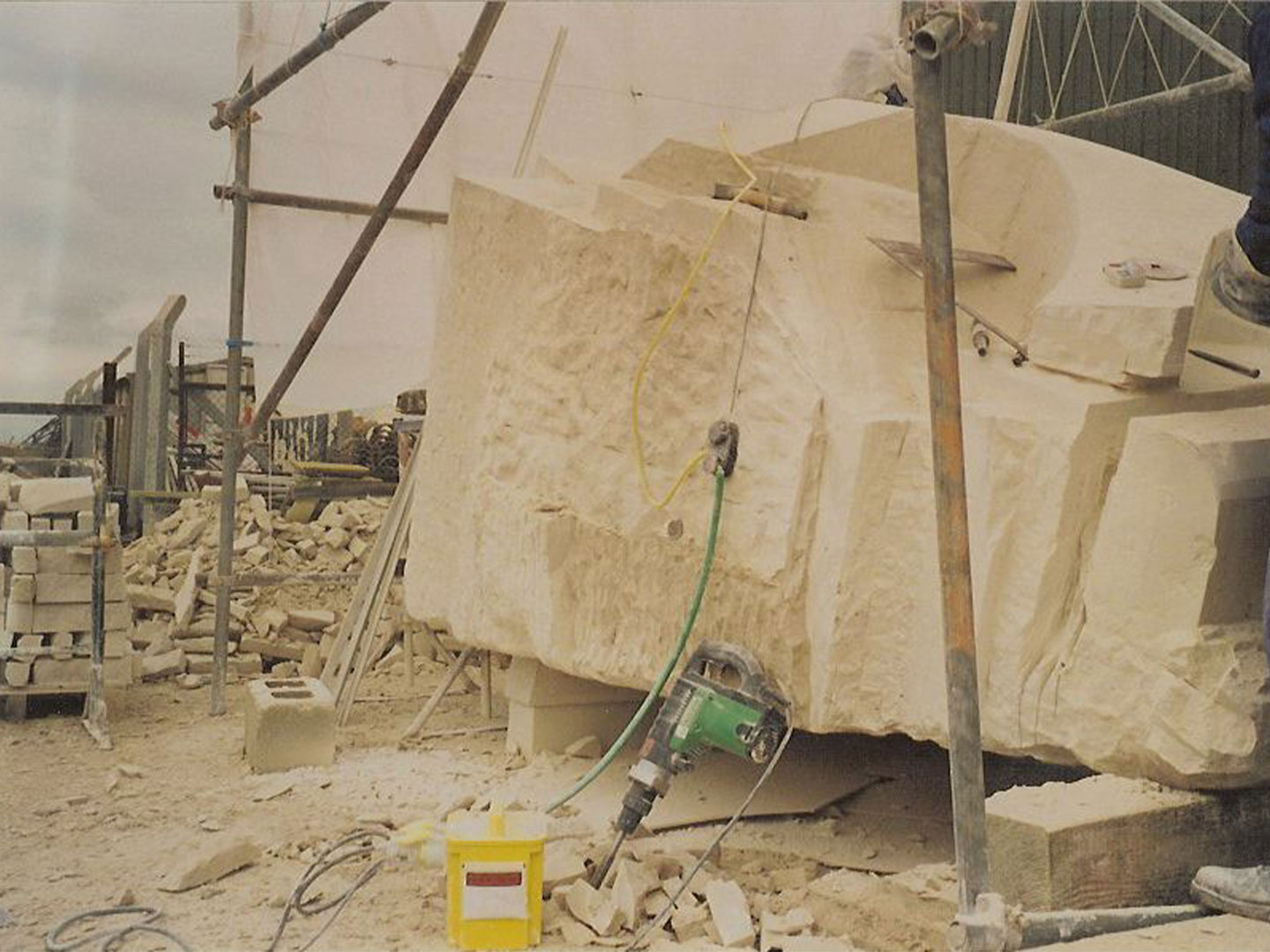 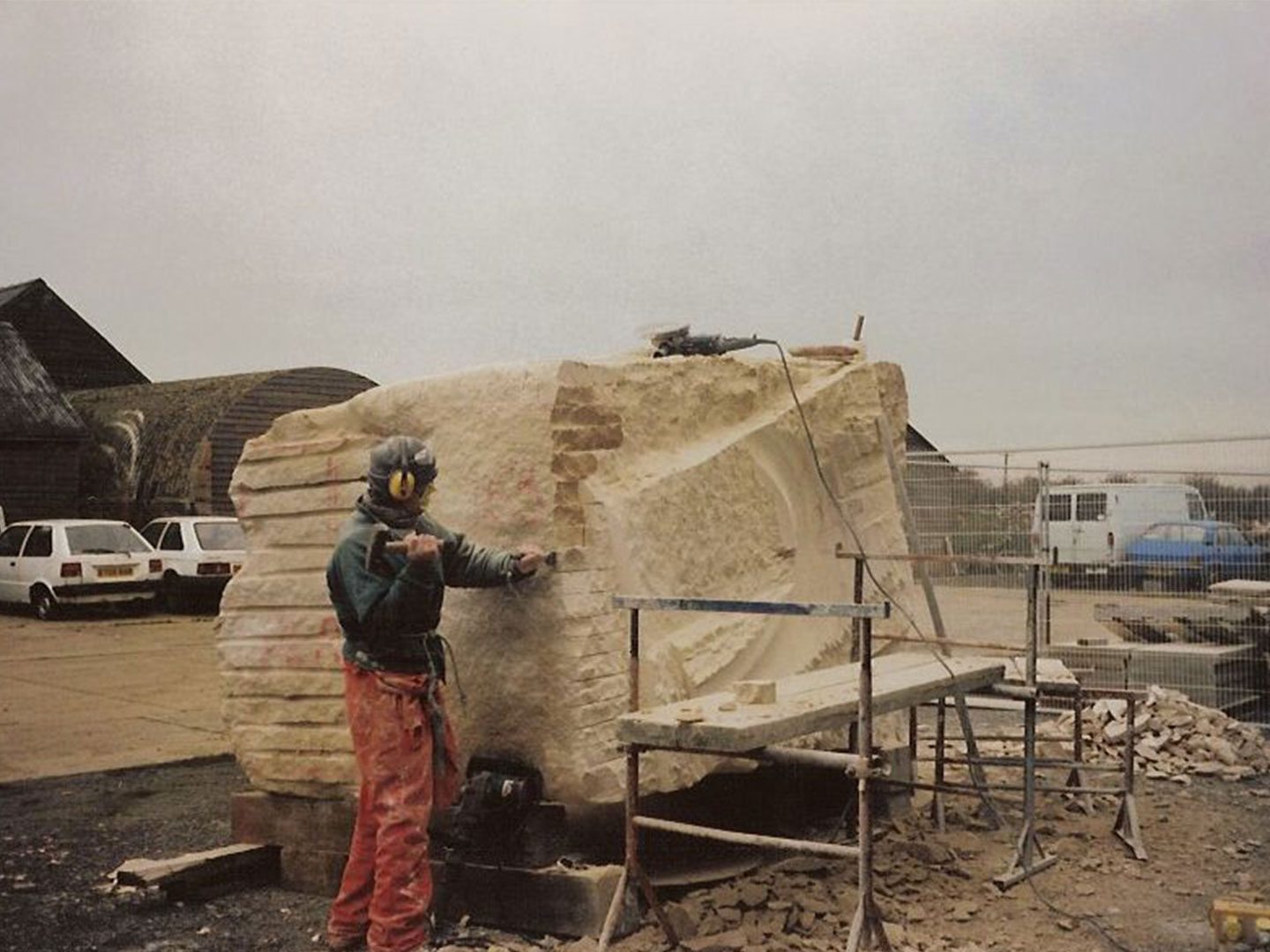 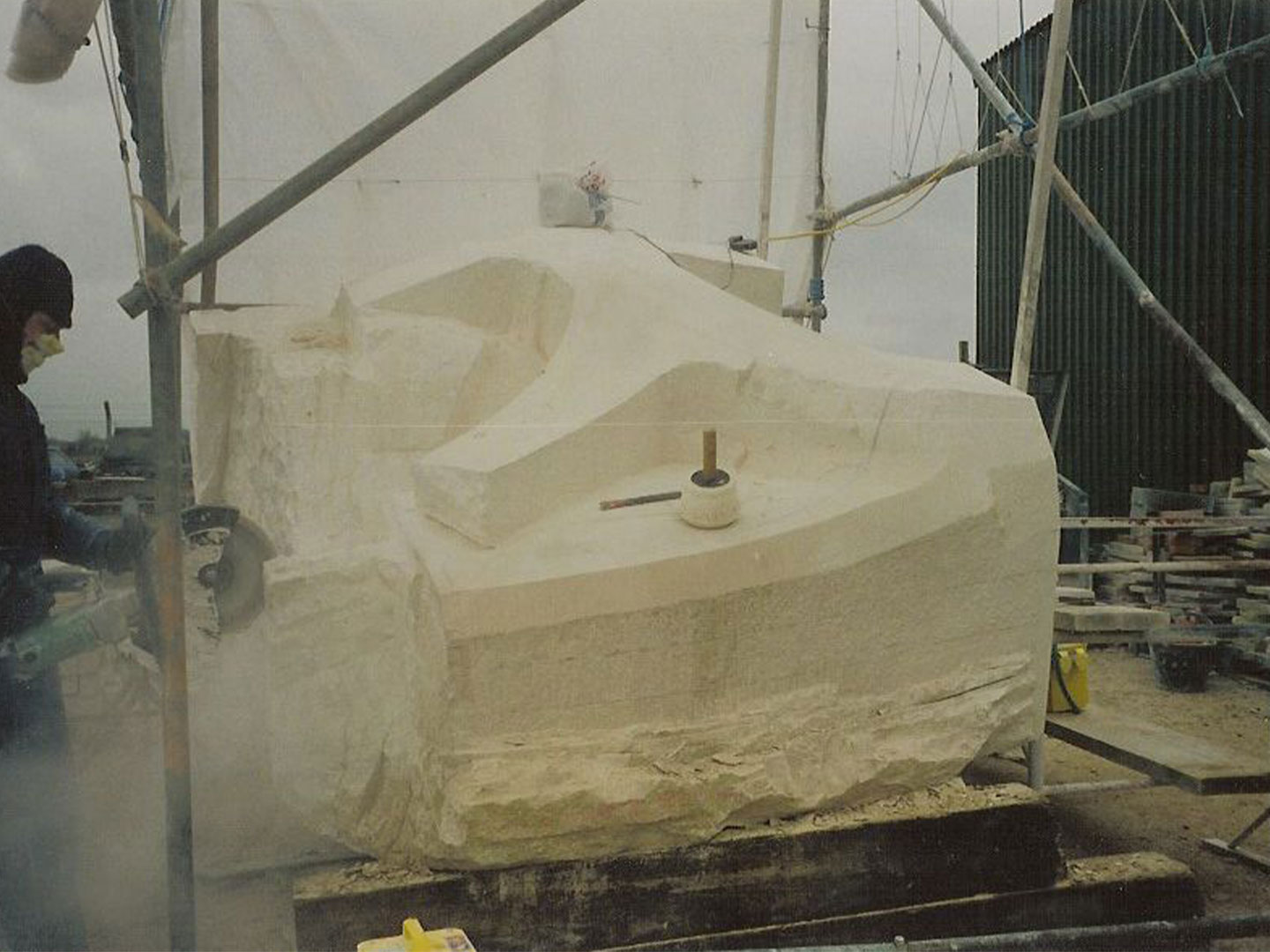 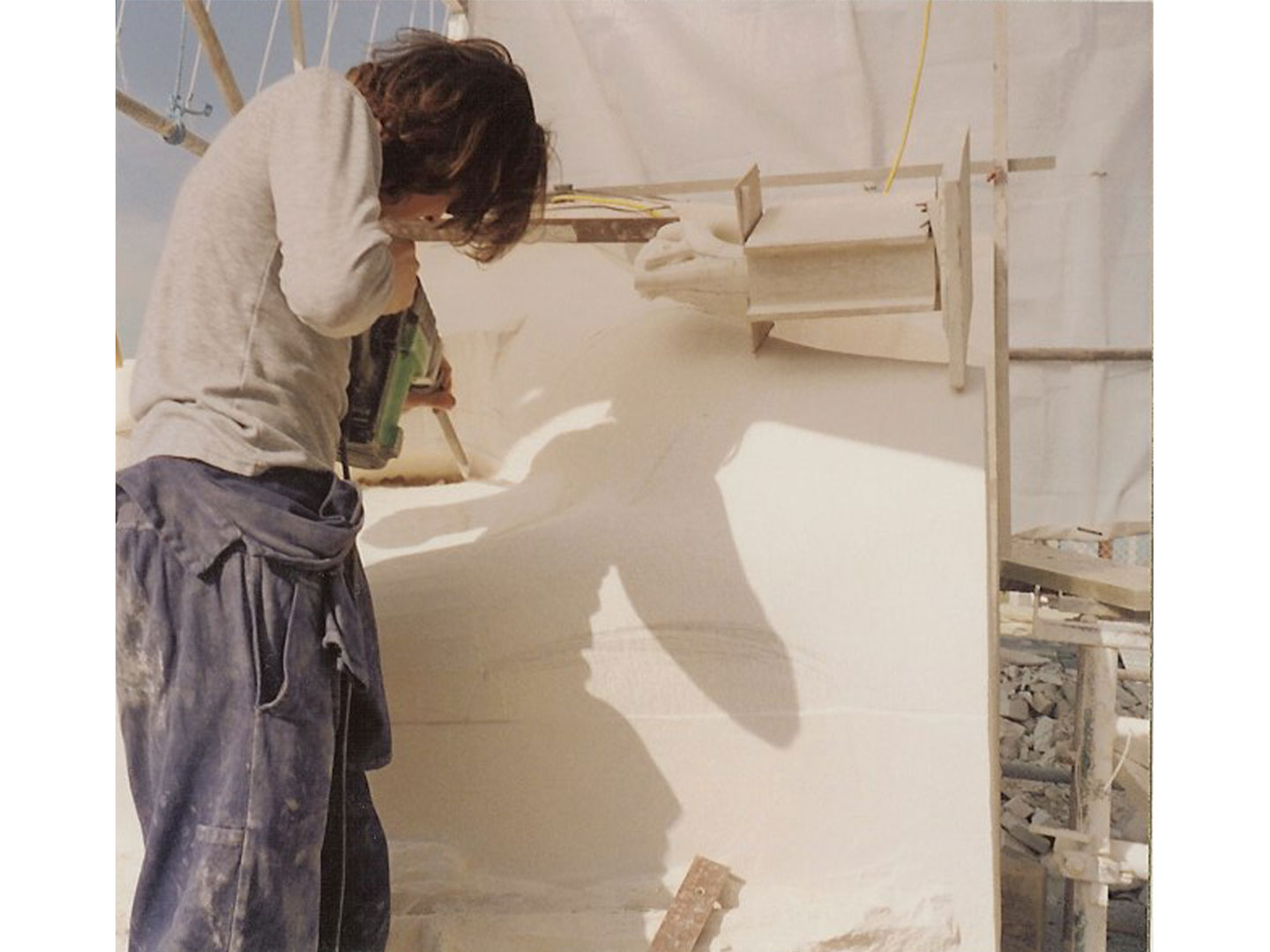 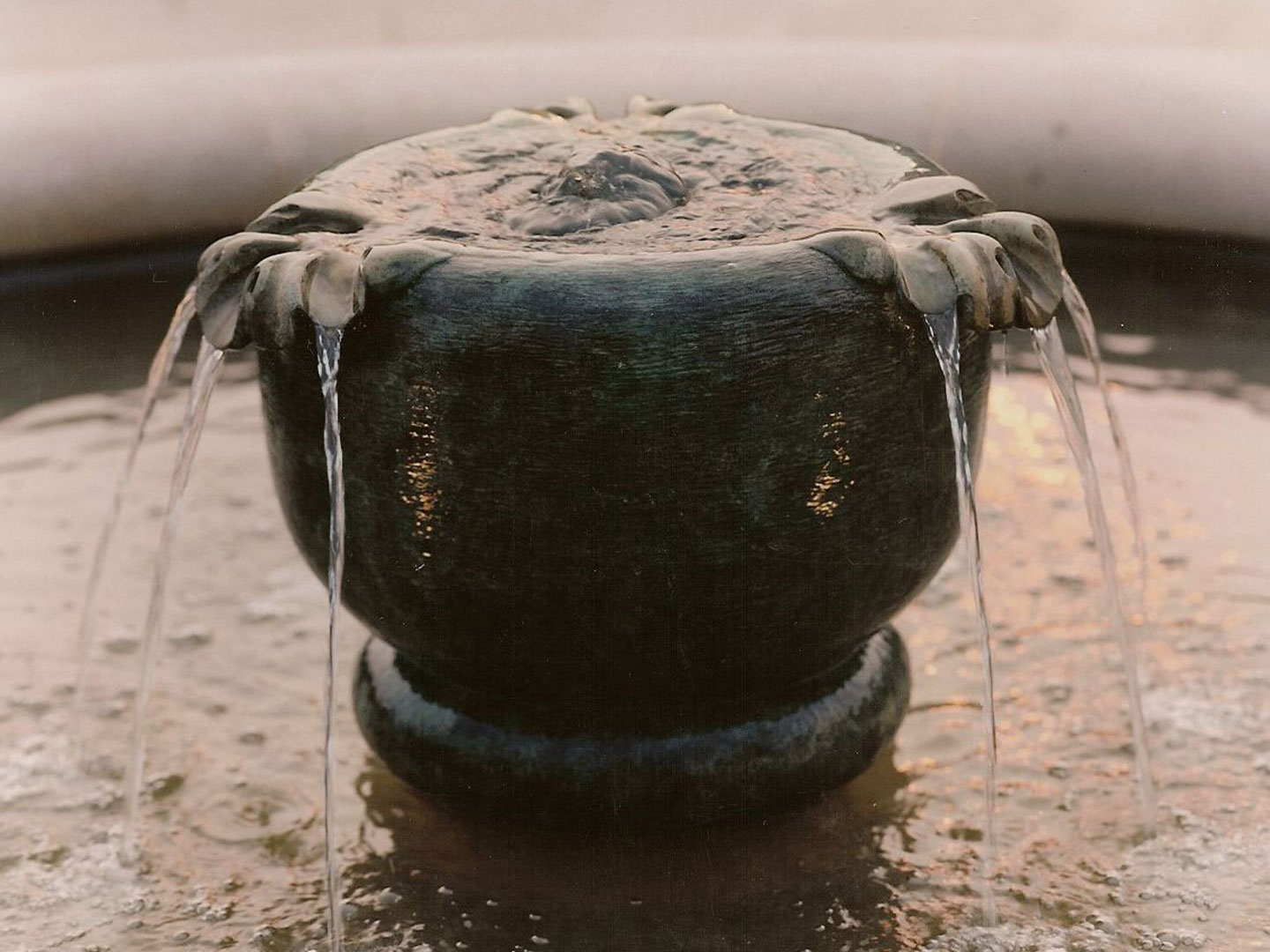 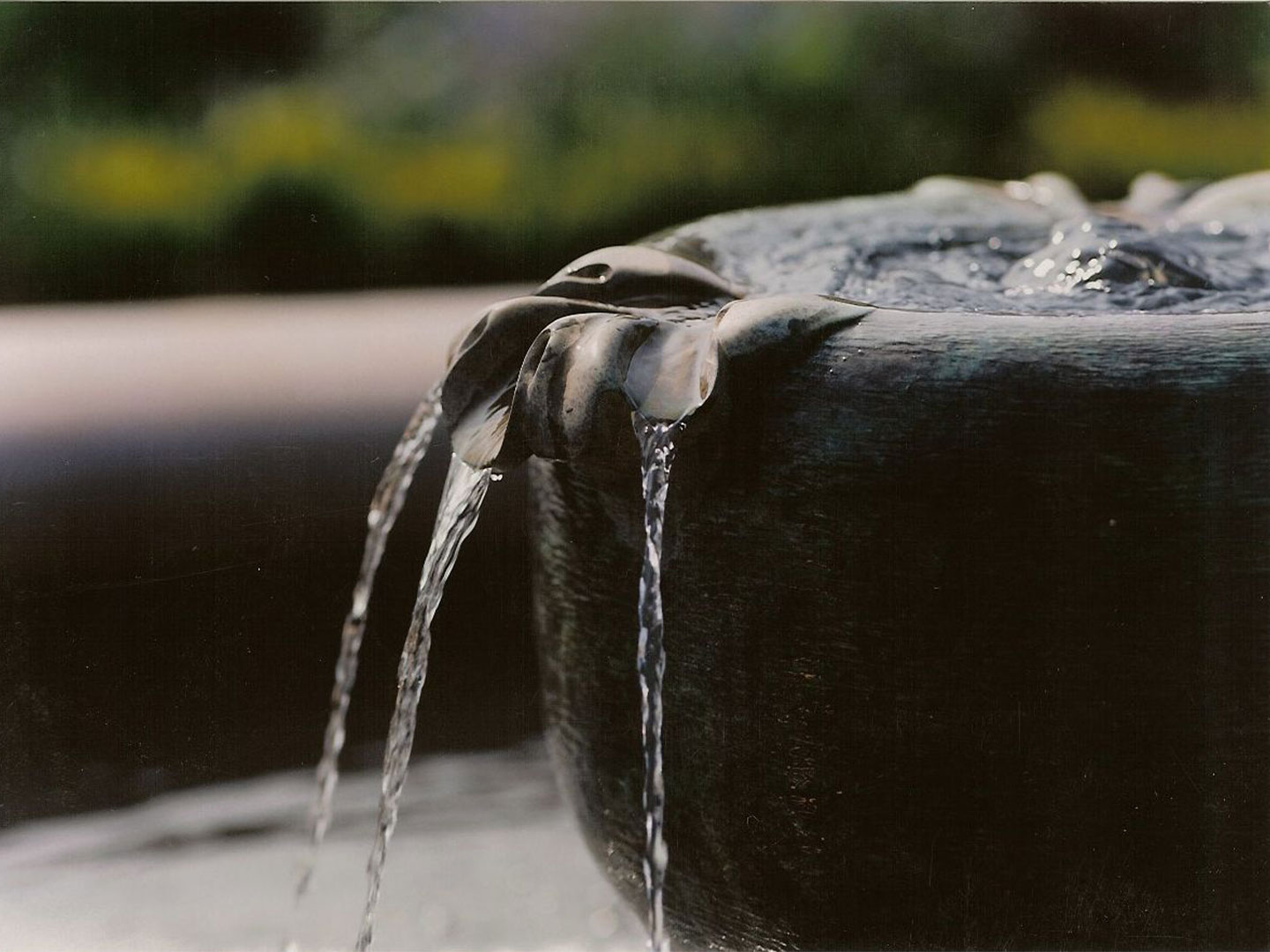 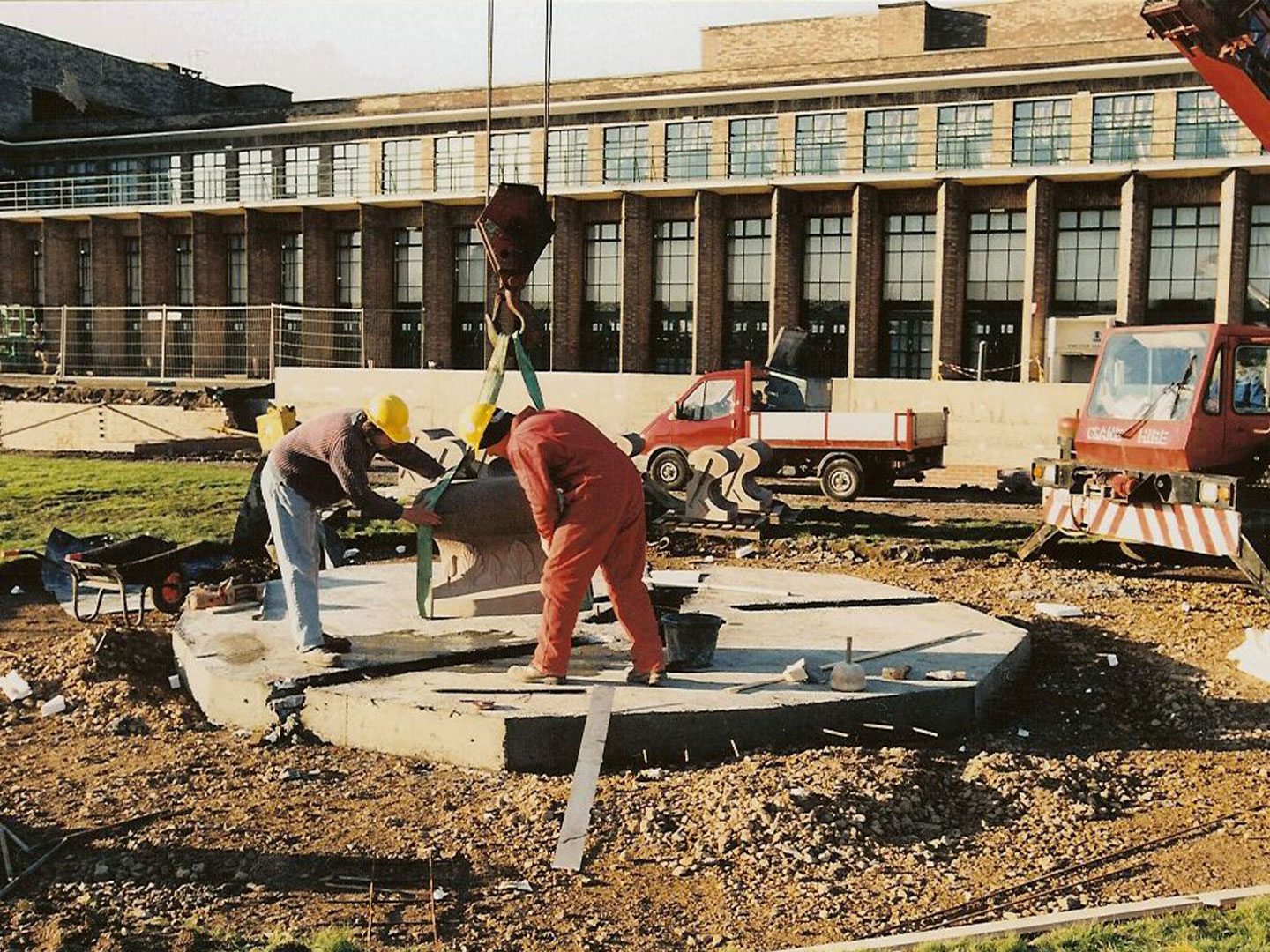 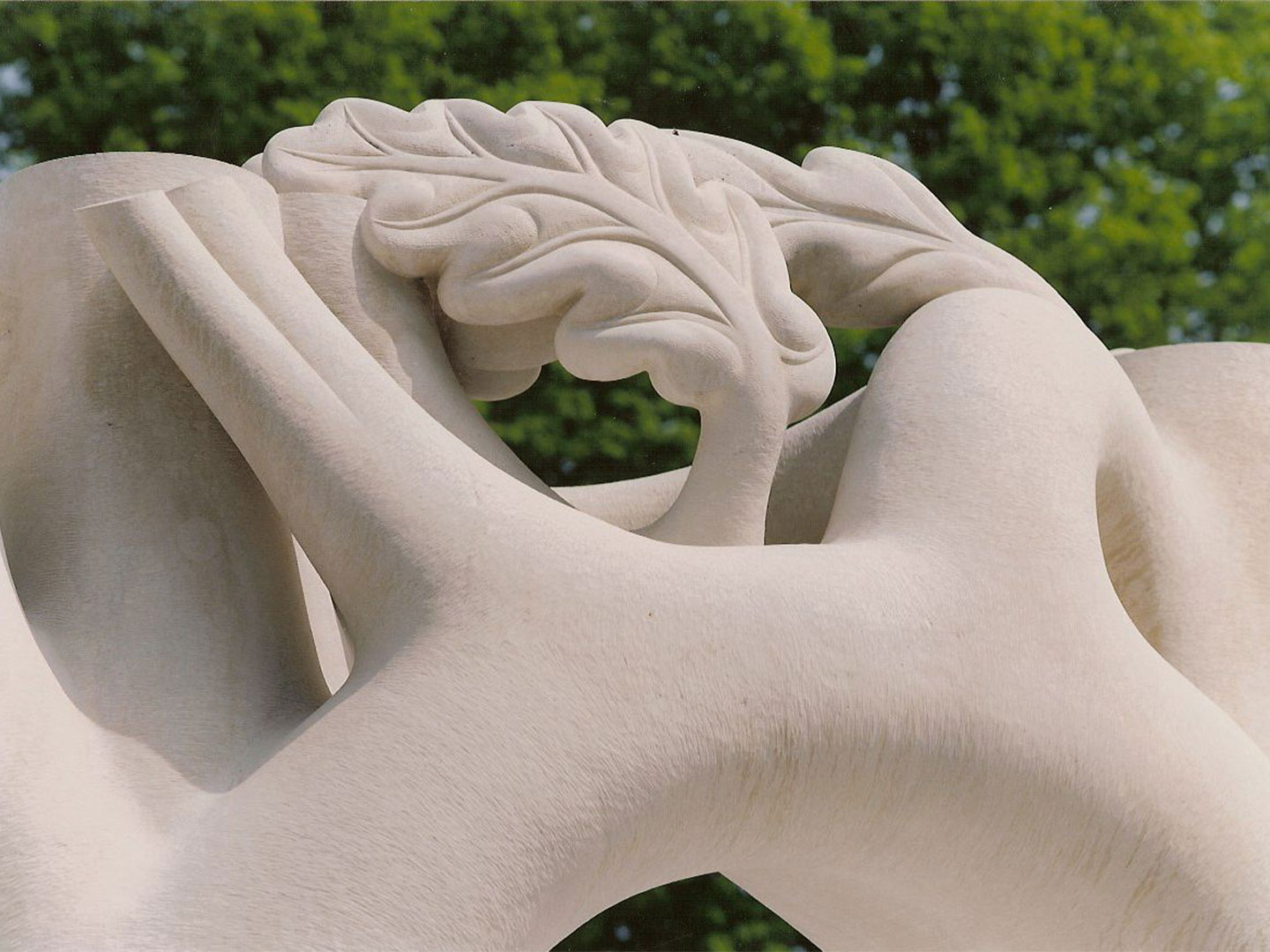 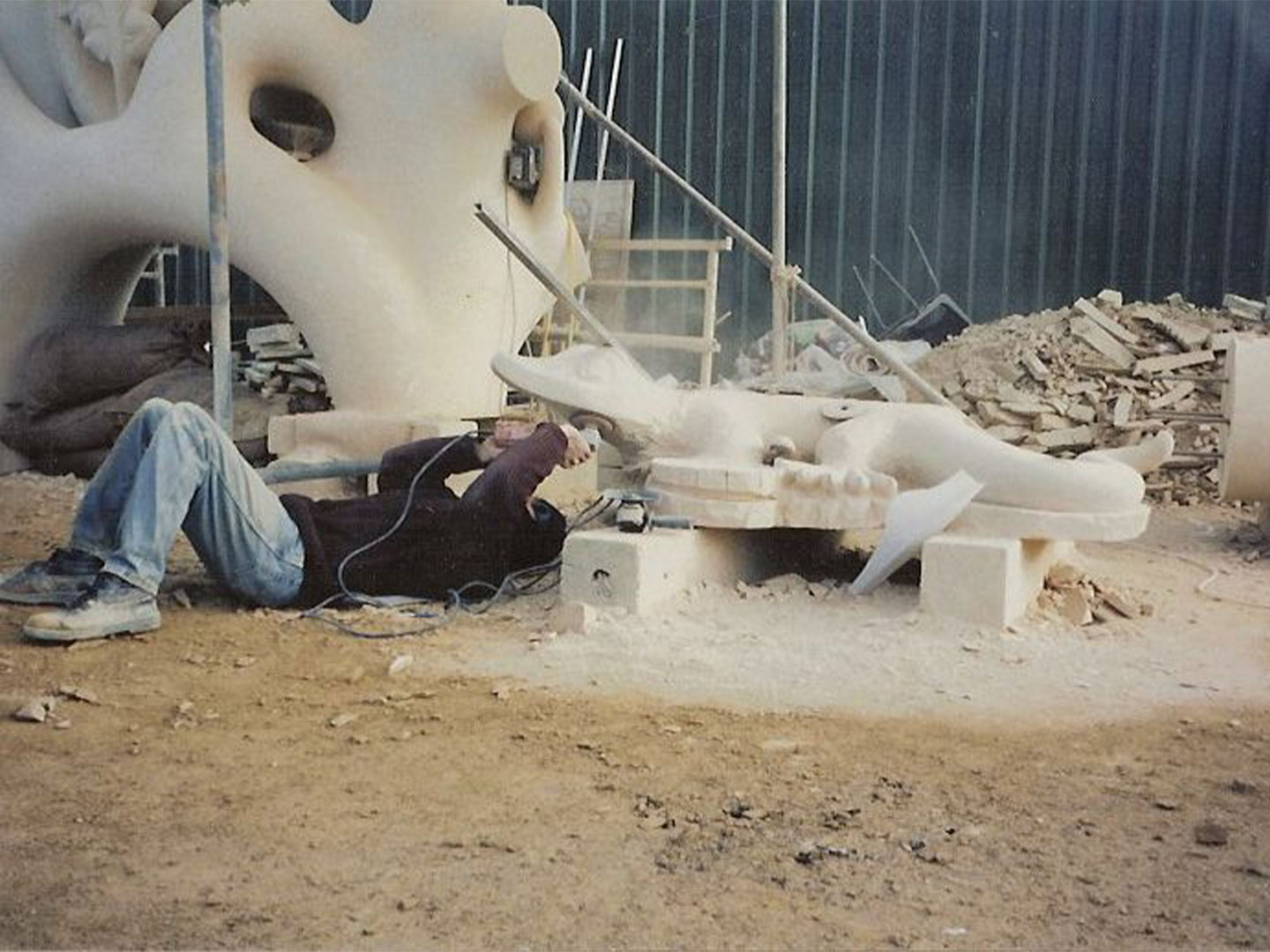 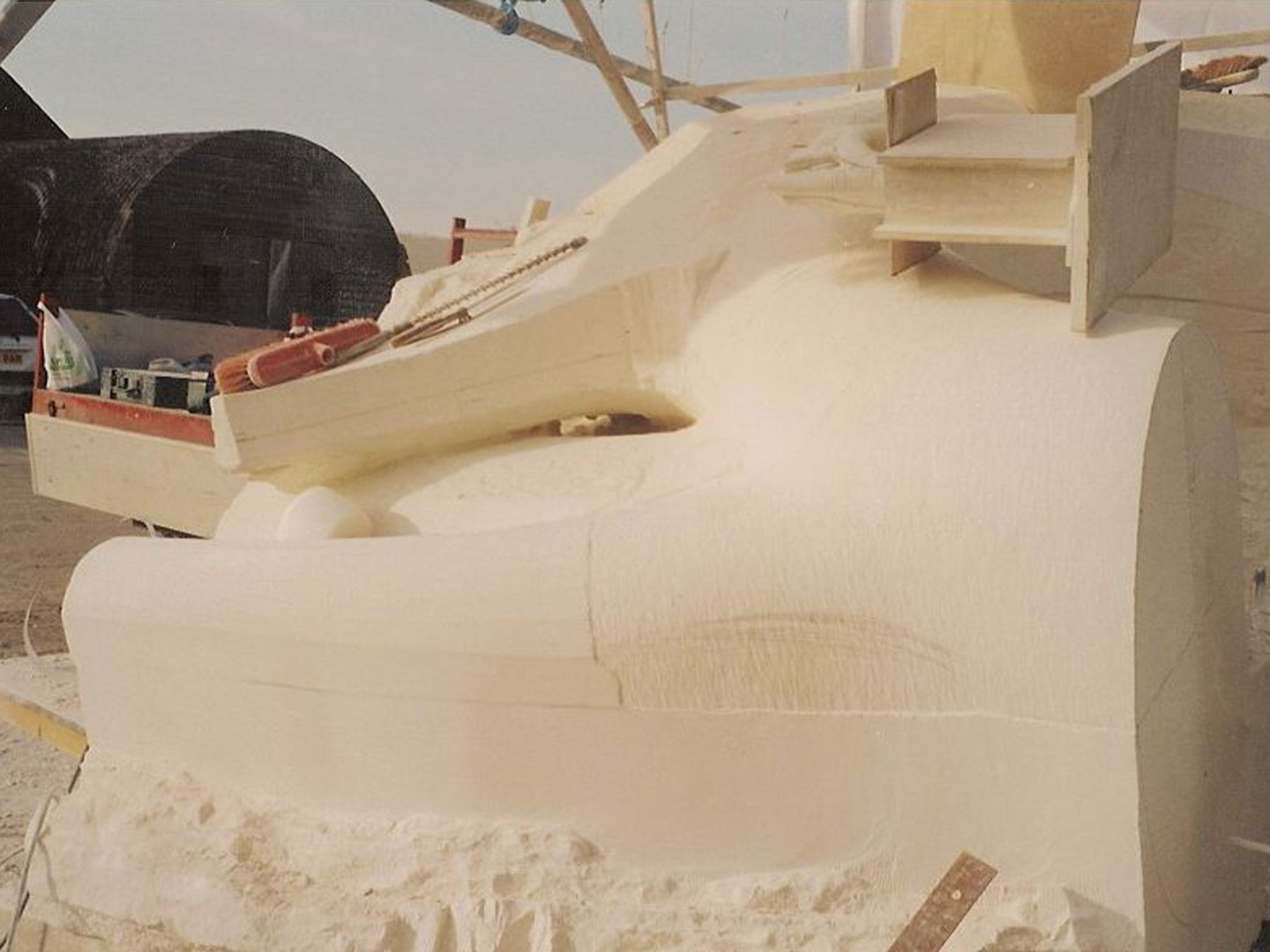 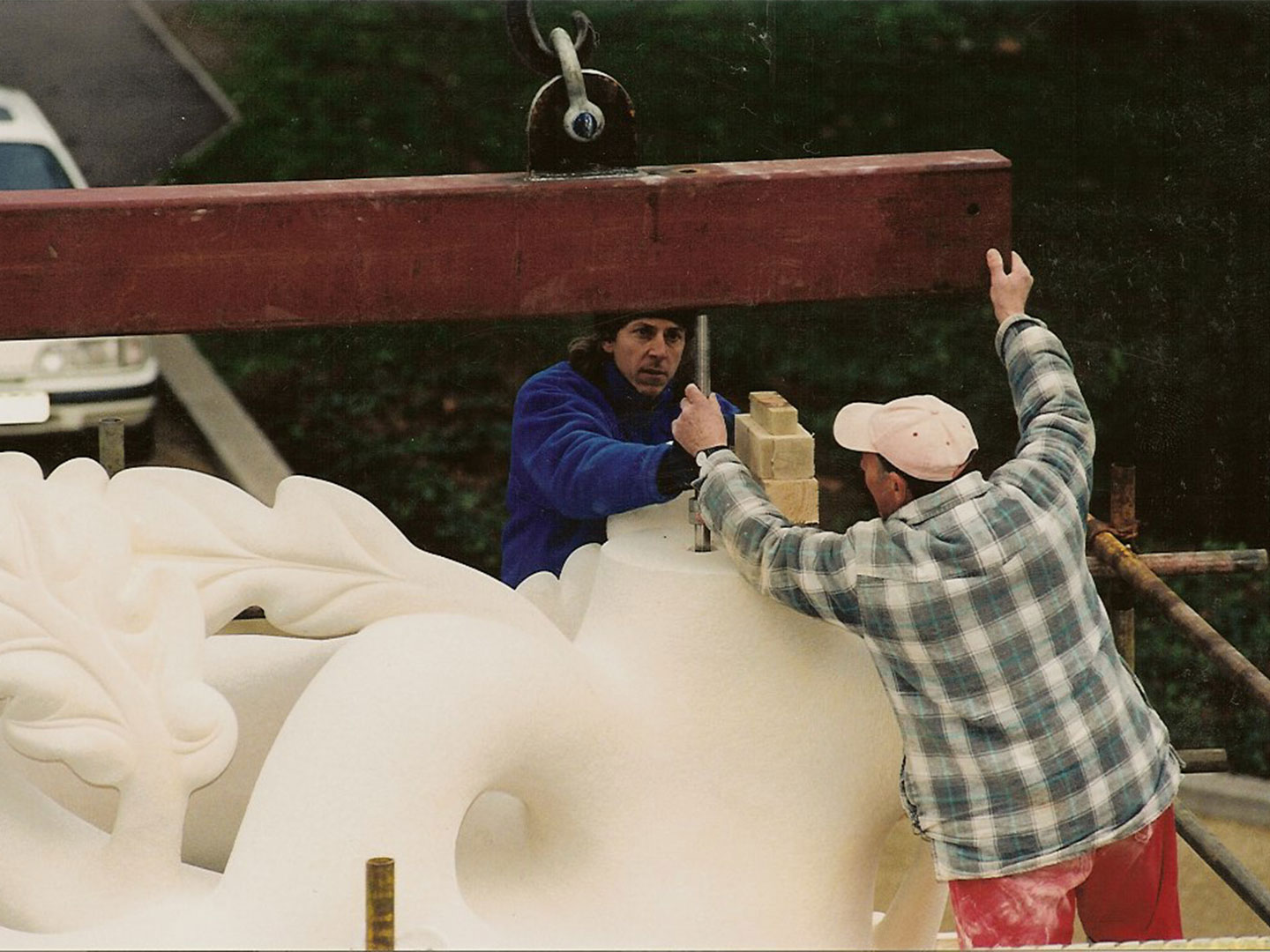 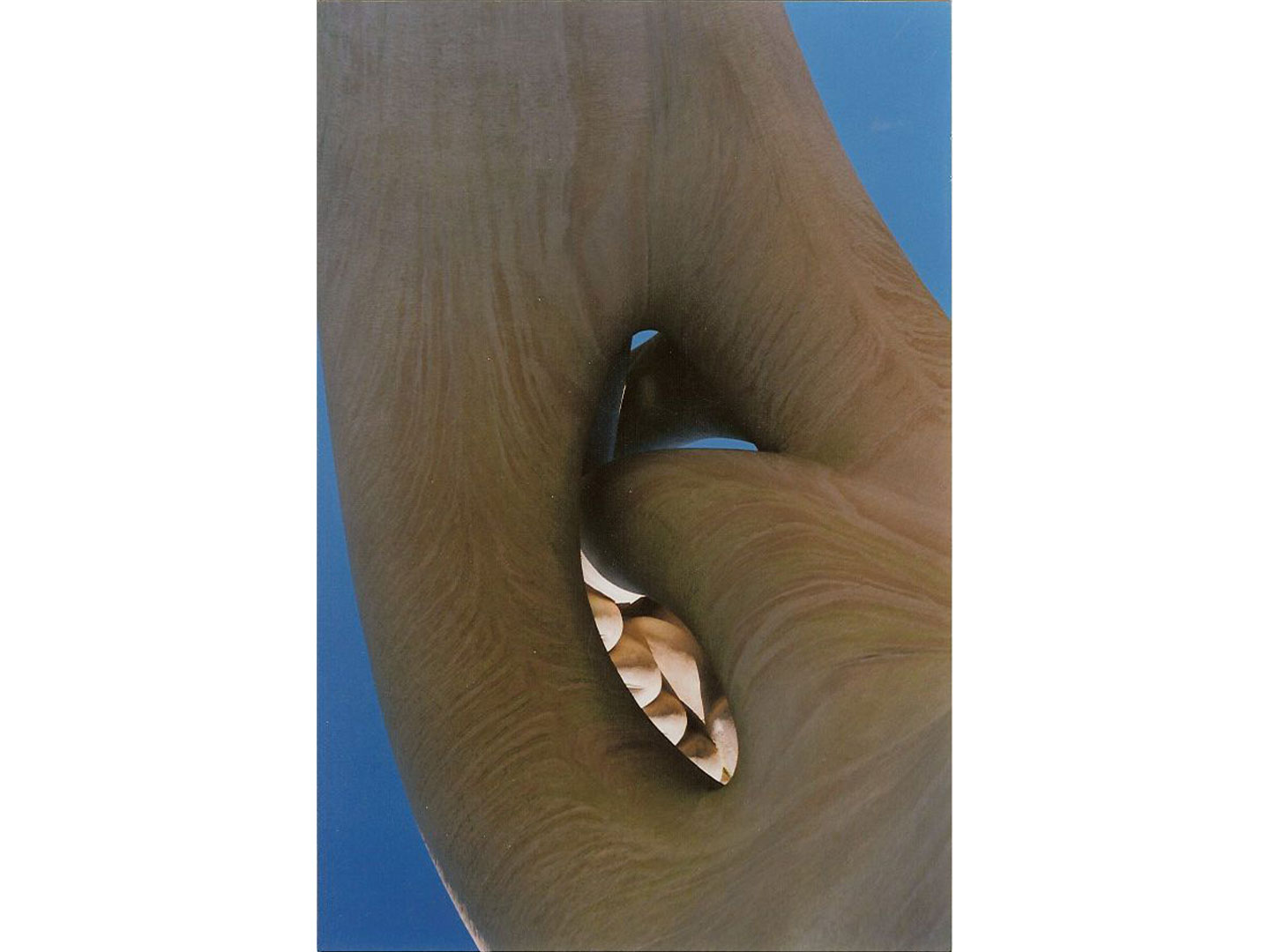 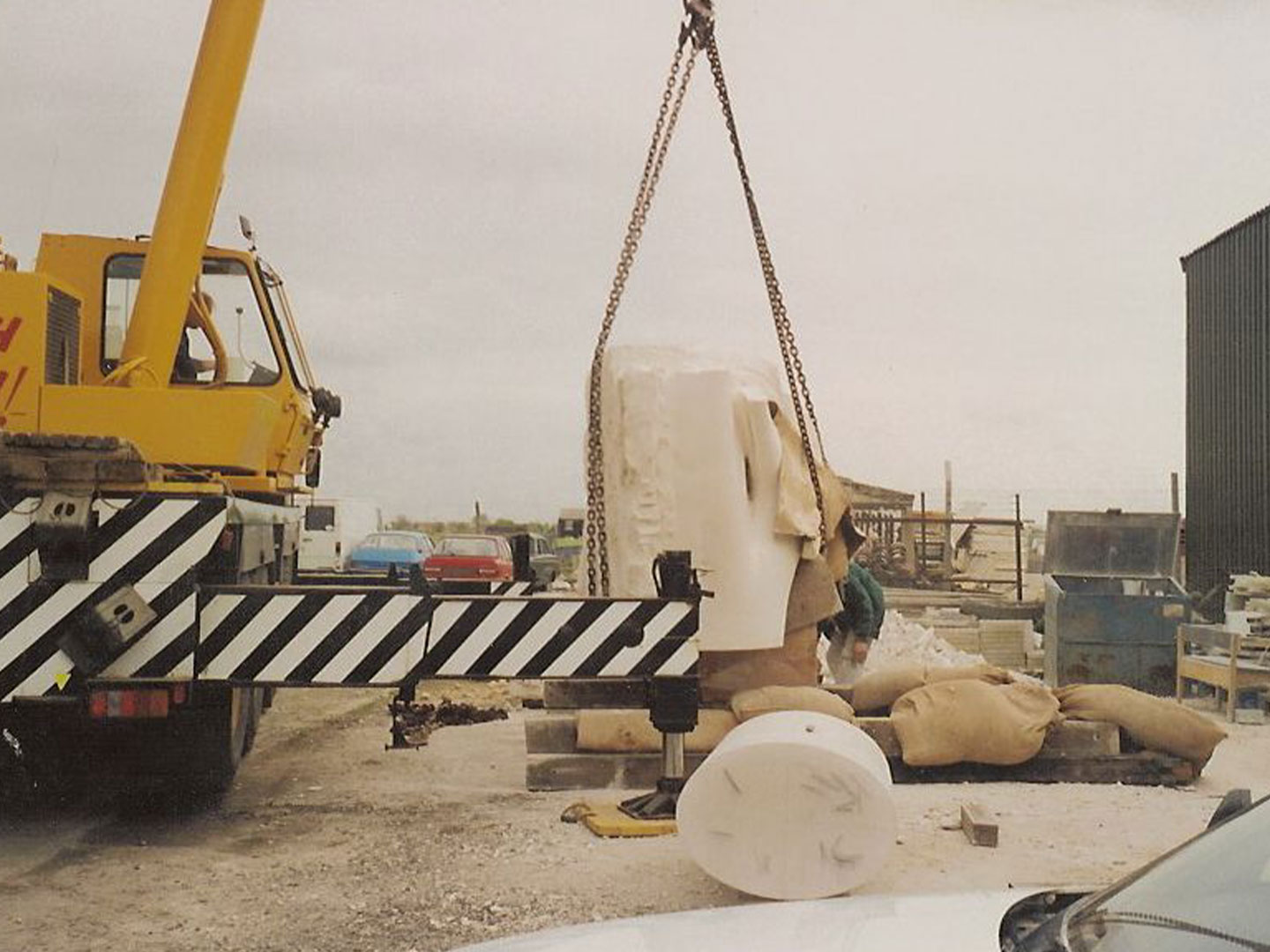 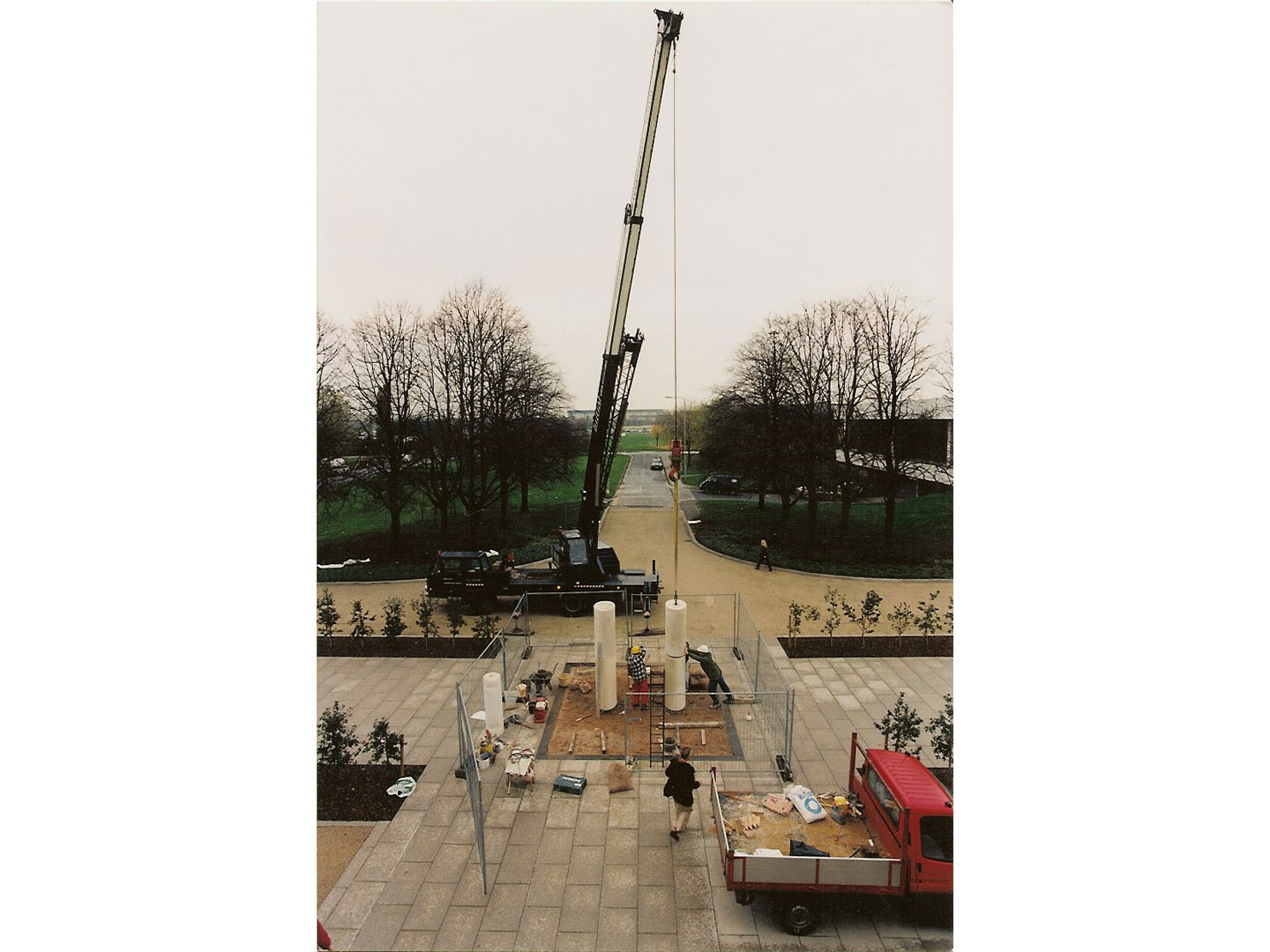 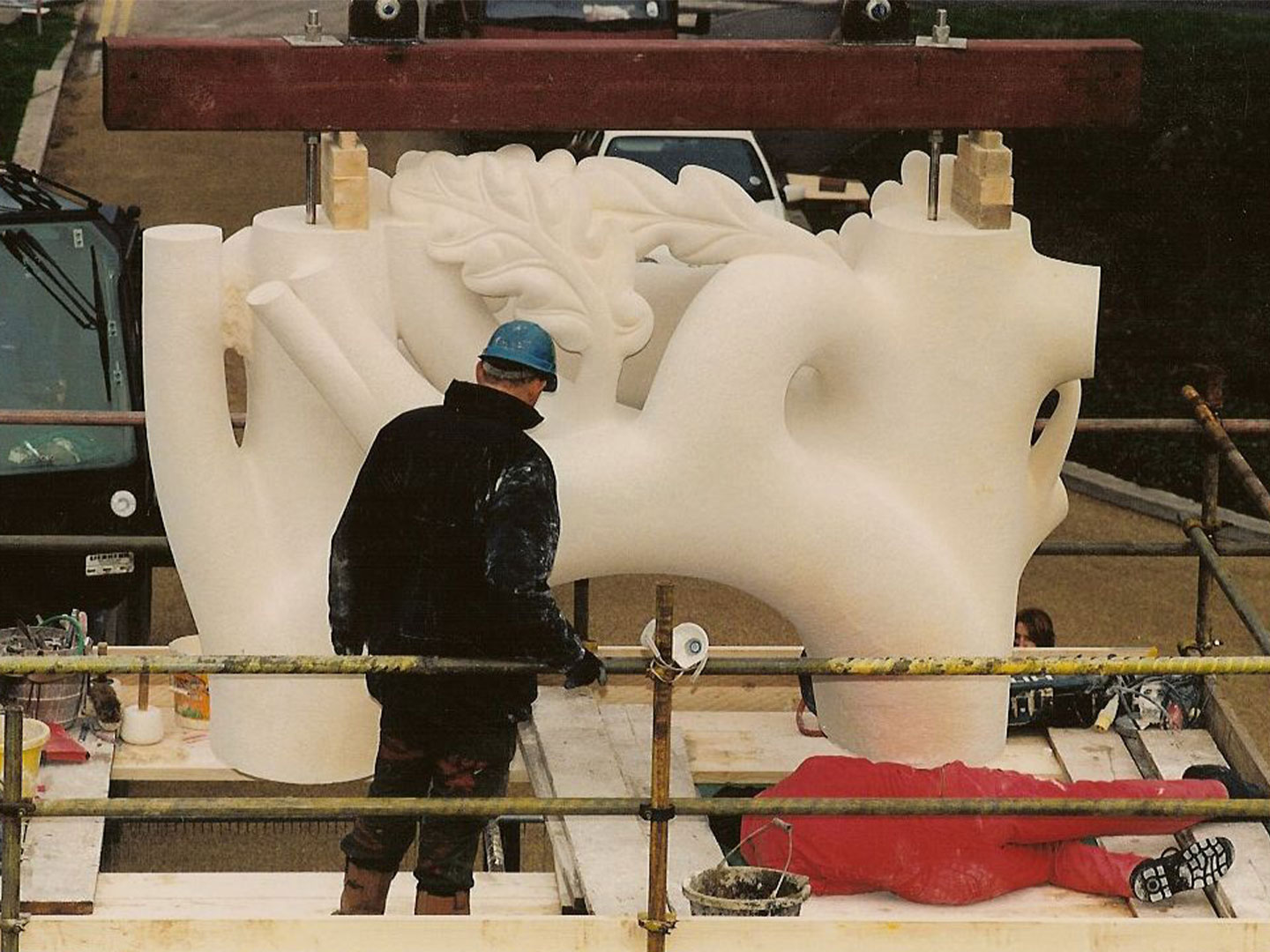 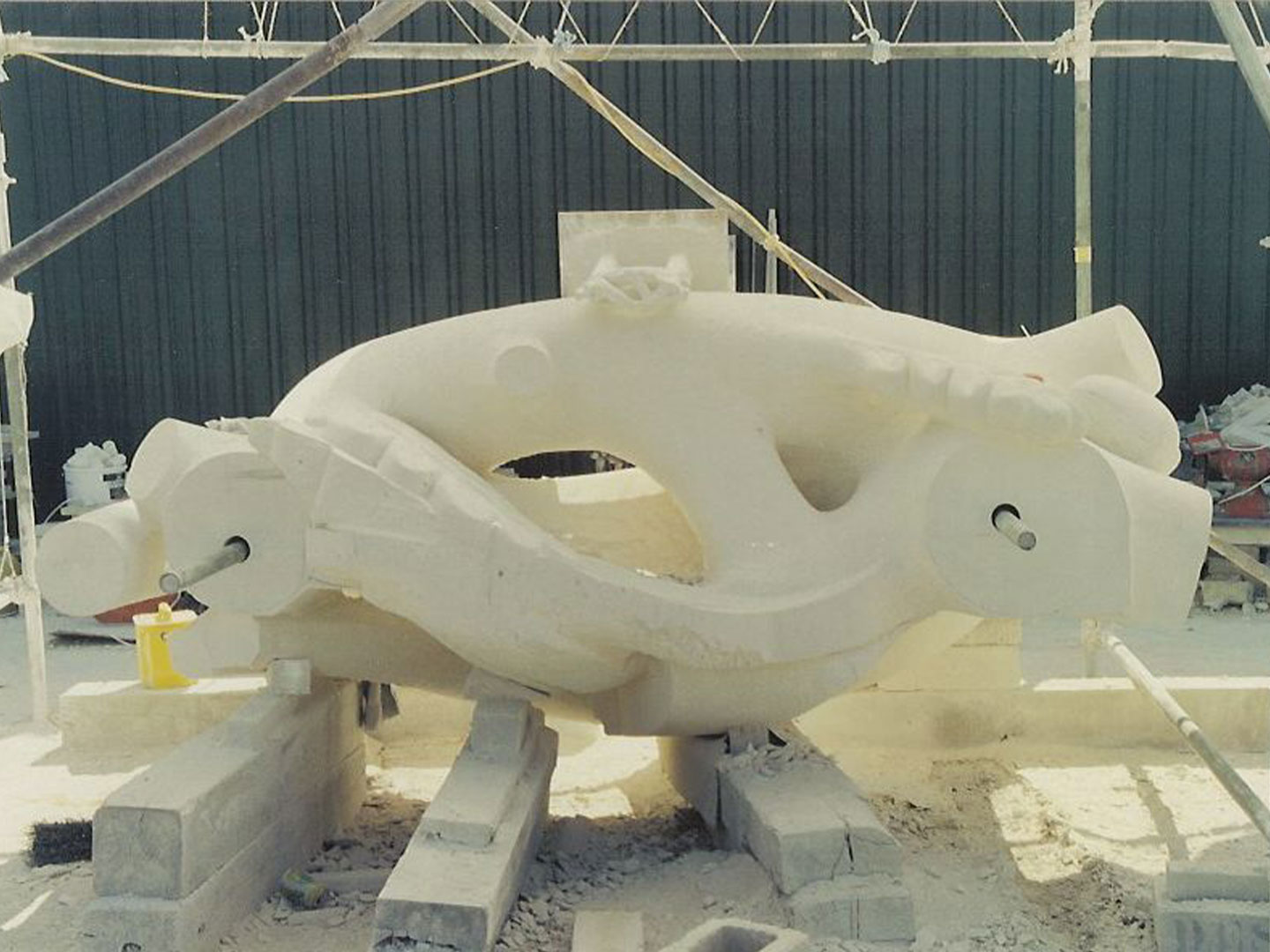 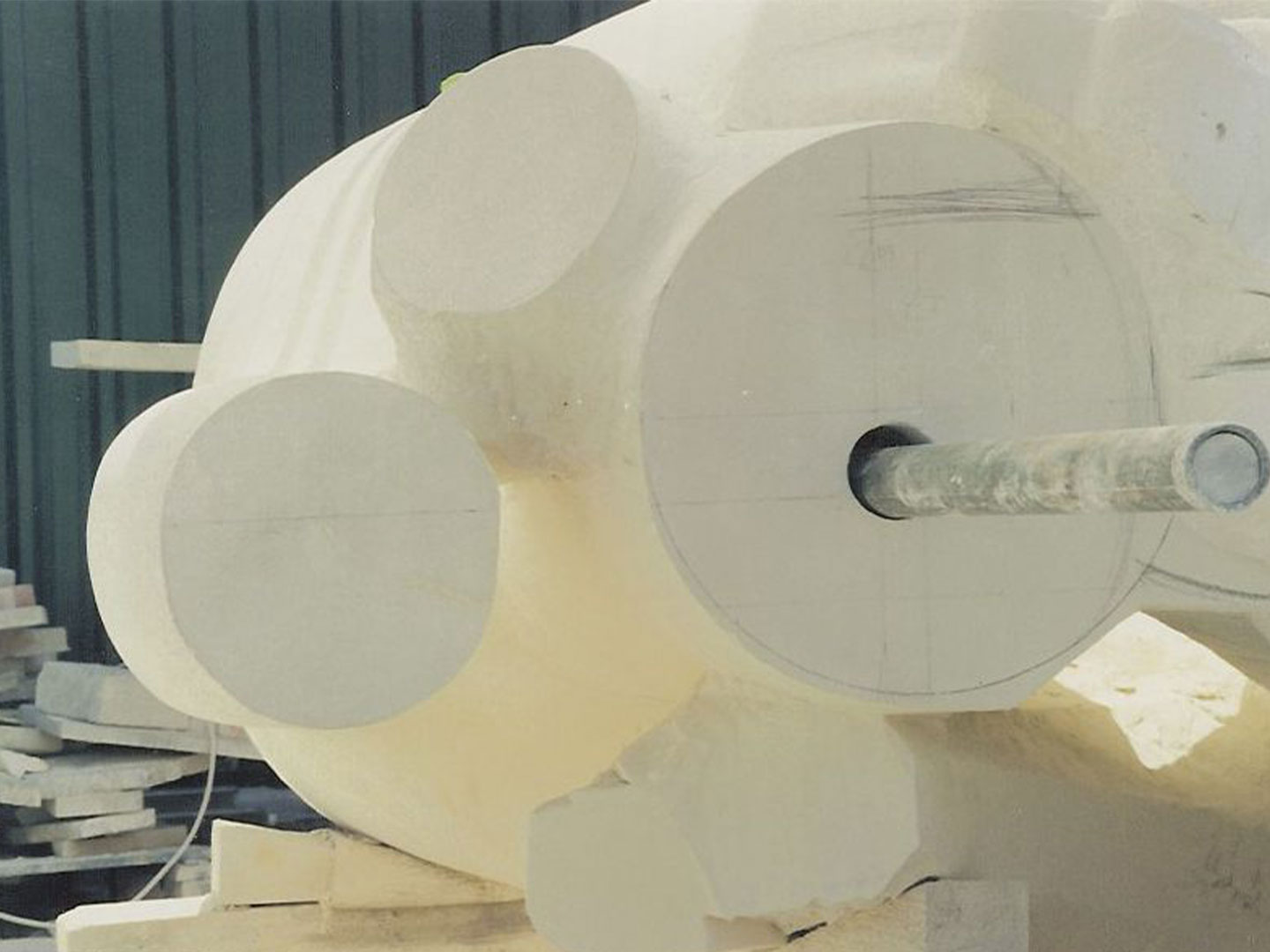 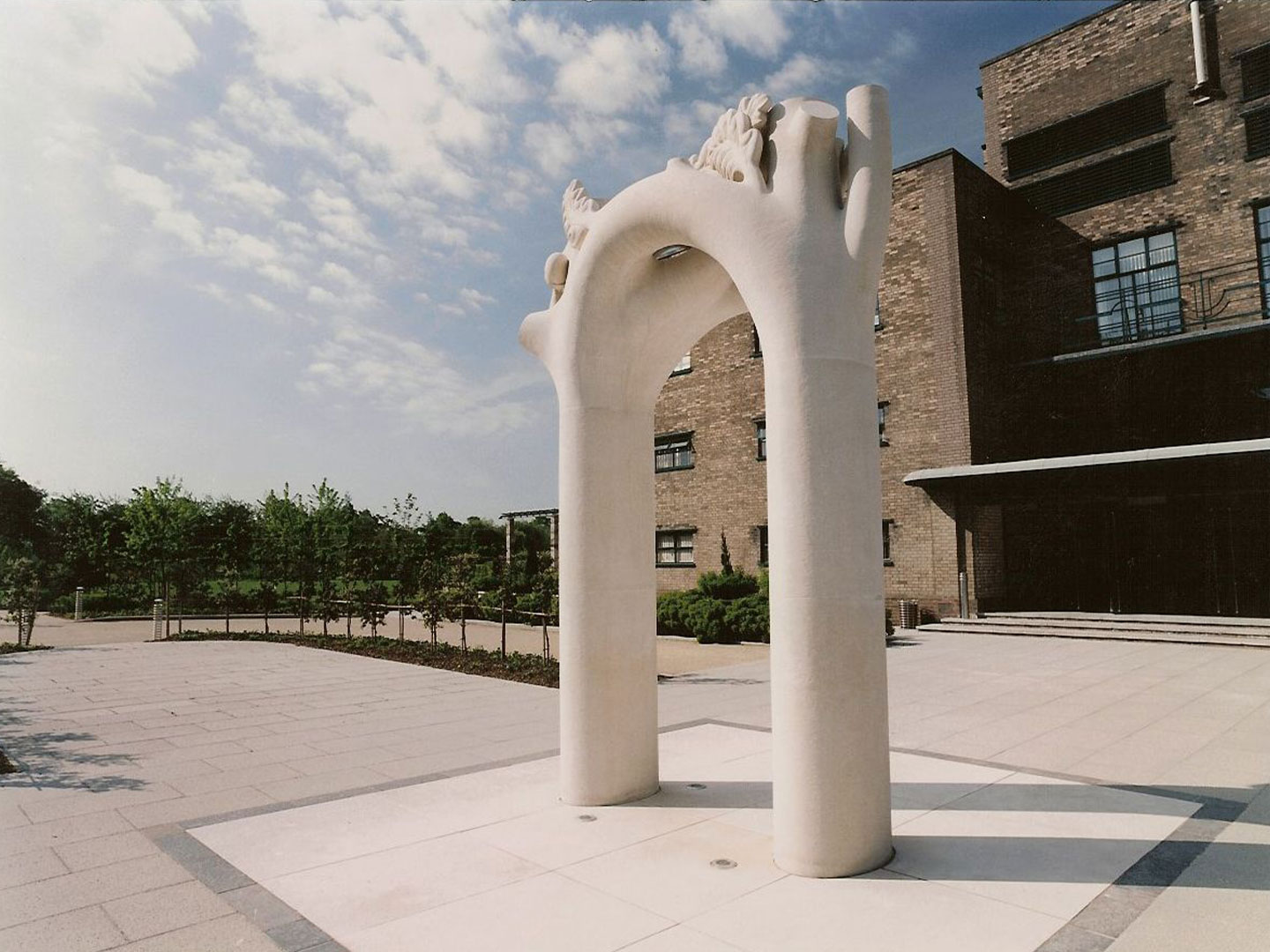 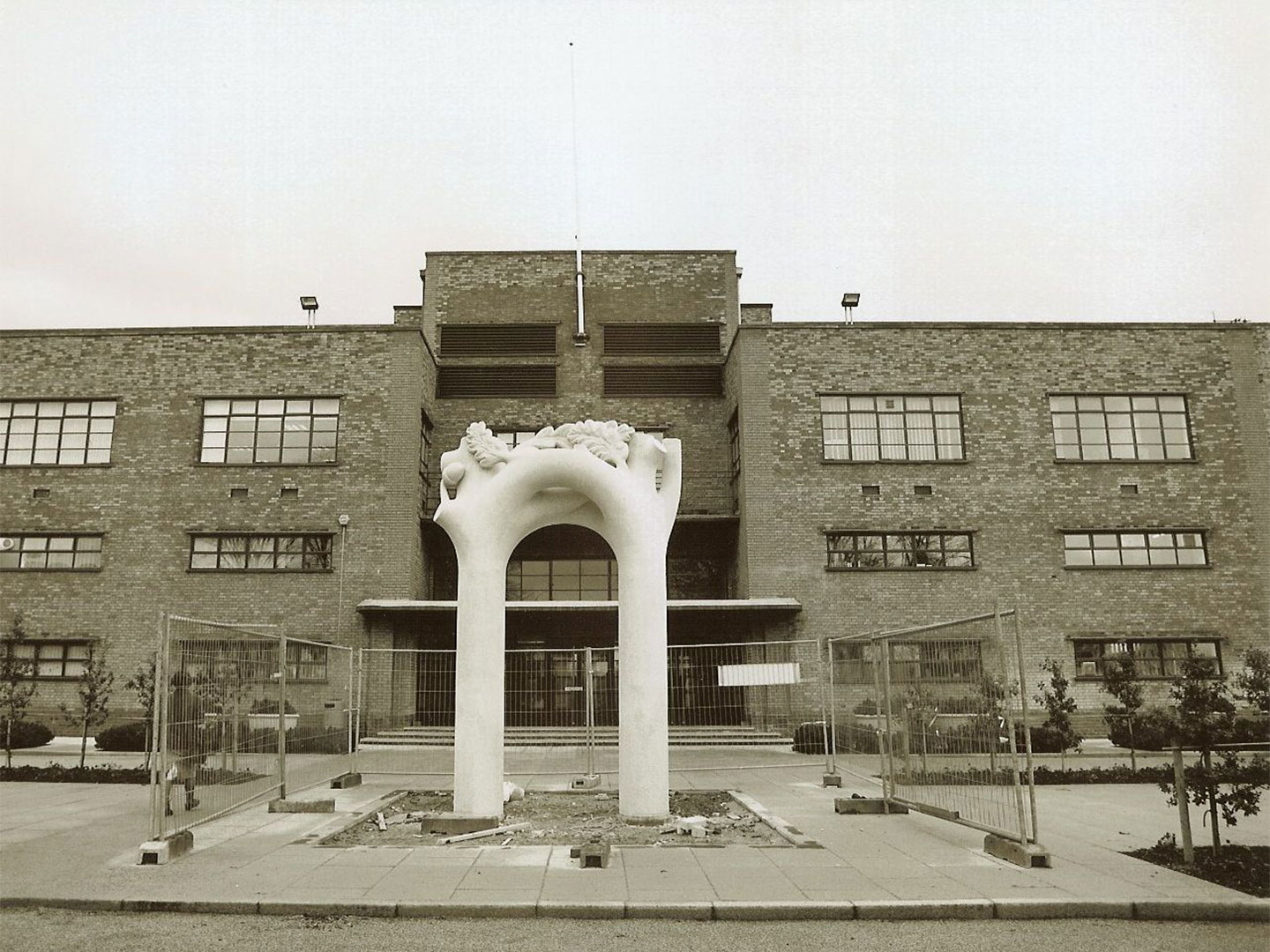 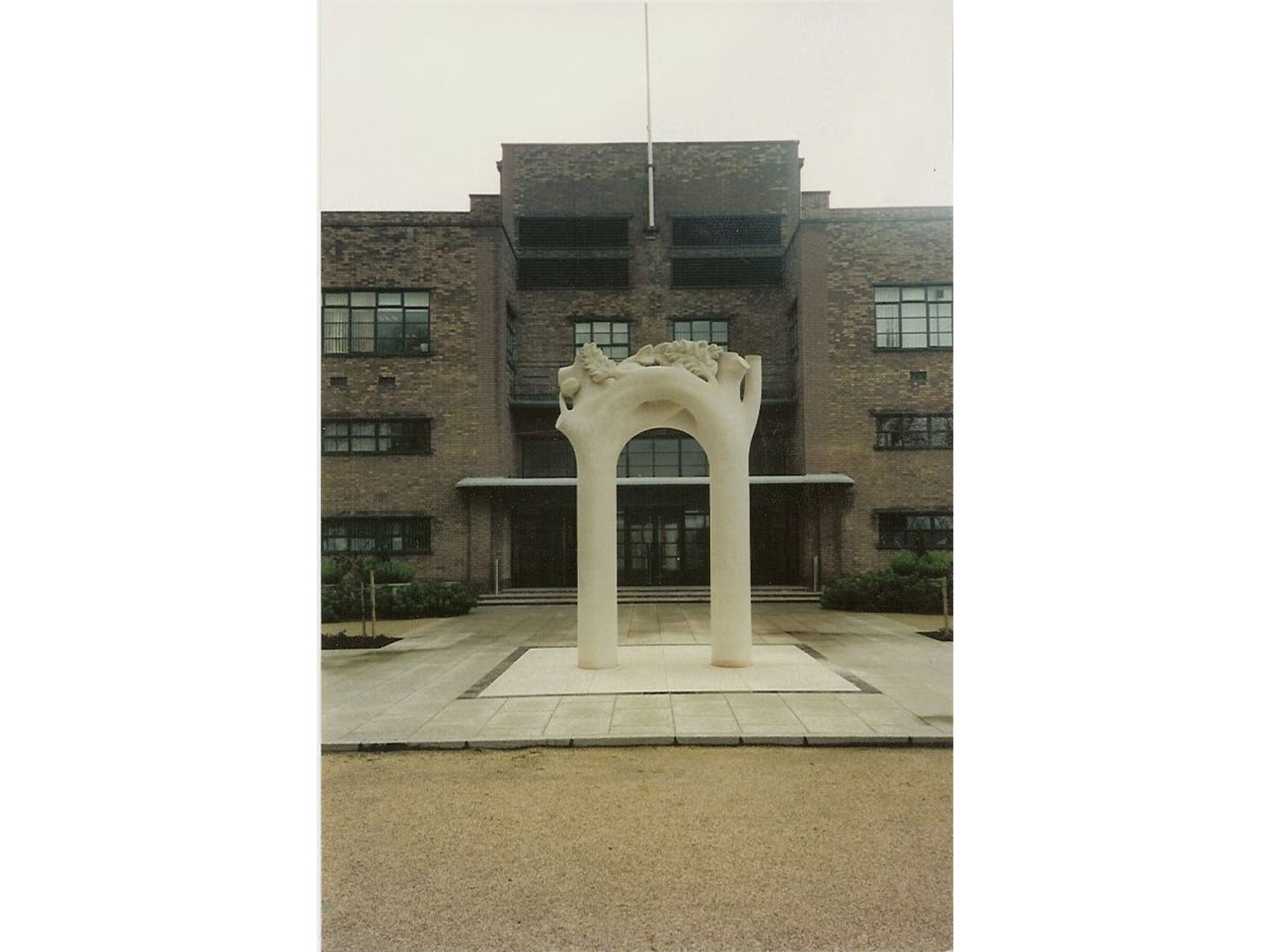 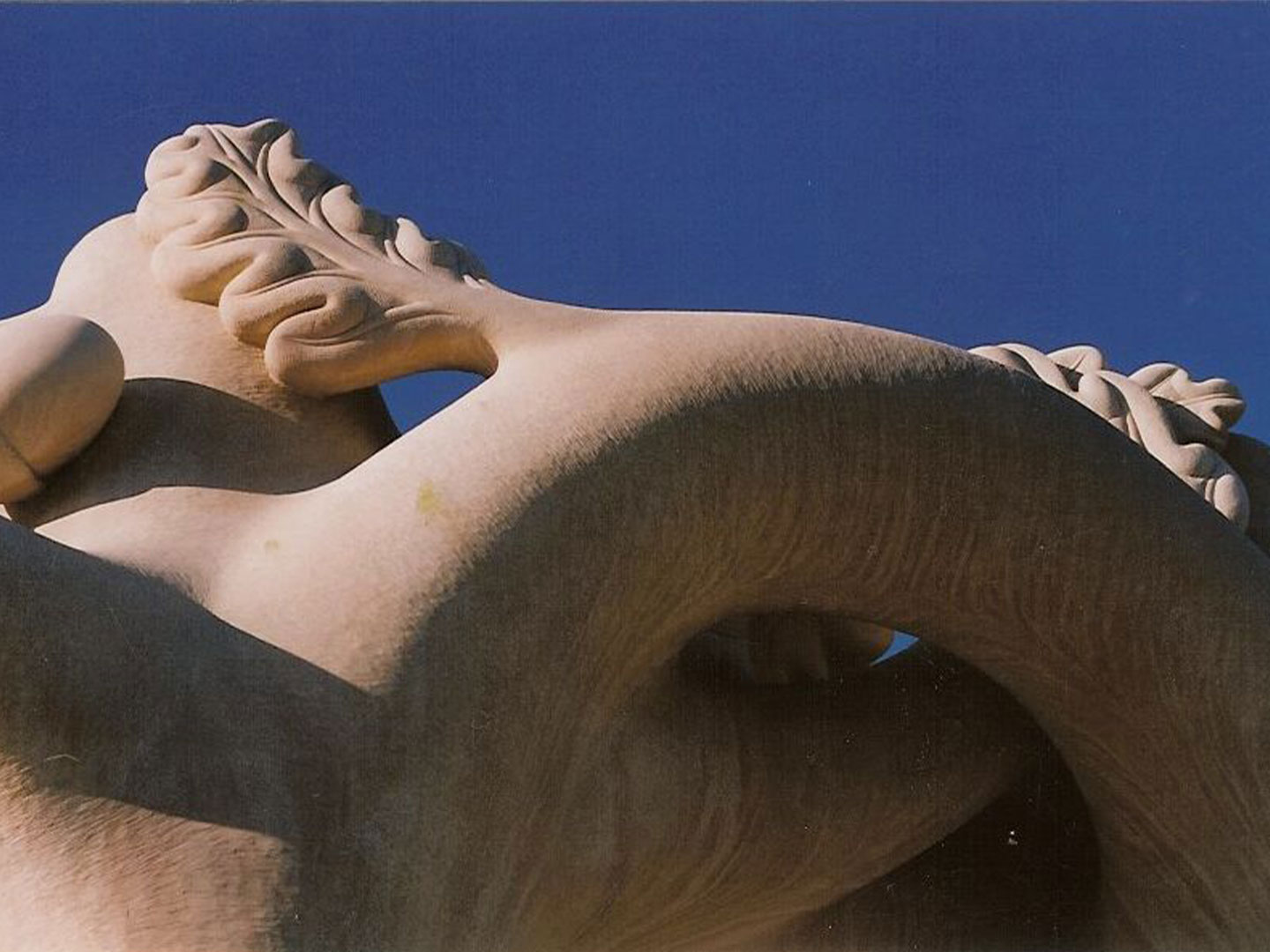 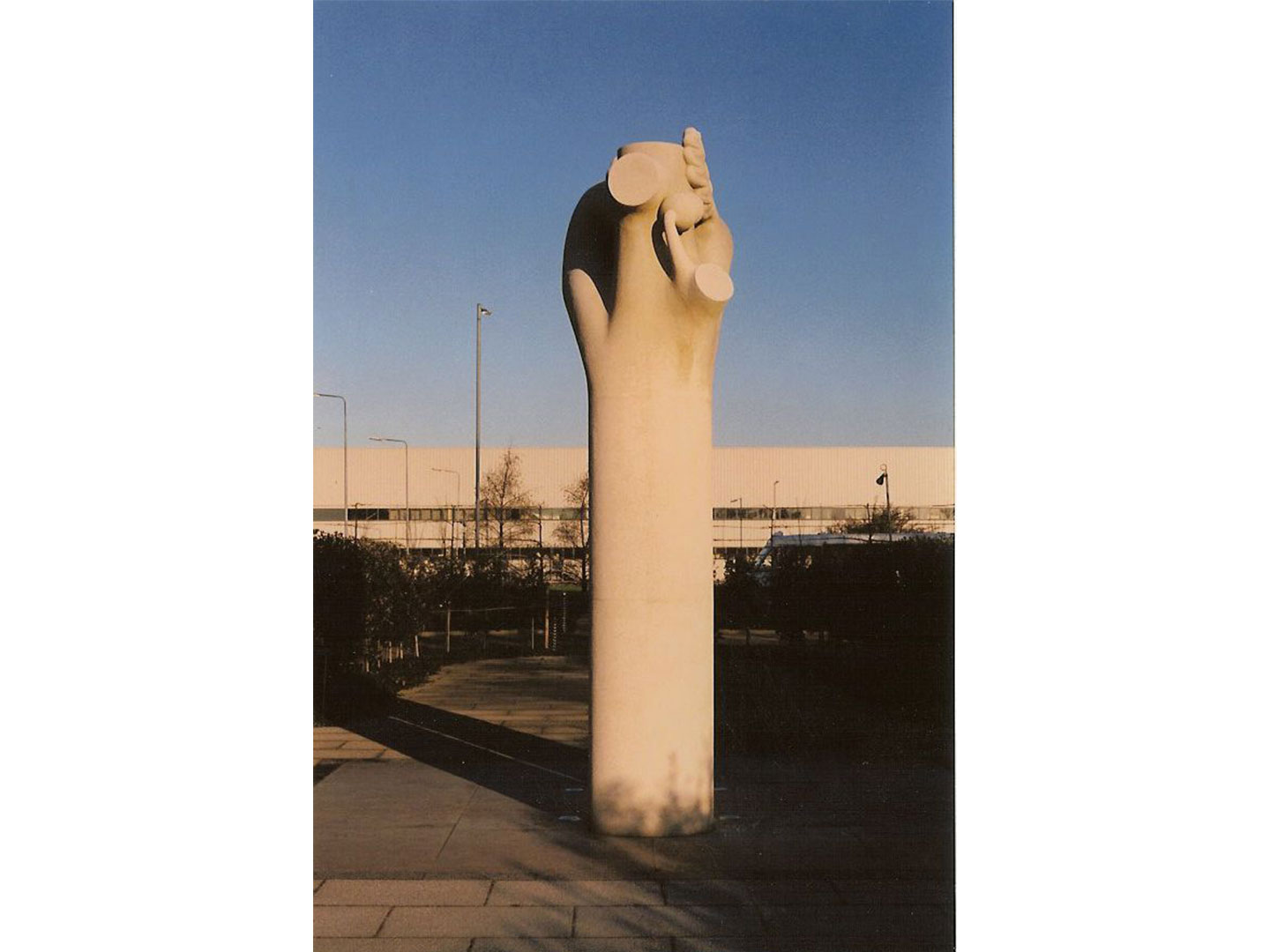 It had to be very strategic. The two biggest issues were a combination of gaining access to carve the intricacies within, and the moving and rolling of this monster. The dynamics of the finished piece were such that the more stone you took away the more vulnerable it was so the main issue was to move it around as little as possible.

The form was an arch and we all know how arches are supported. Well an arch is obviously a device to form a doorway or window and at the same time support that what is above. It relies upon the side walls acting as a buttresses in combination with its own weight to stop itself  ‘spreading’ snd failing.

‘Embrace’ had no buttress. The forces within it though had the same dynamics as an arch, but this single piece had to have strength within its single entity to hold itself together. A mix of instinct , knowledge of the material and carful examination of the maqute gave me enough confidence that this would work.

I sleep well, normally! If I am horizontal, I am asleep. However the days and nights approaching the morning of the crane arriving to roll this stone over were pretty sleepless.

The crane operator was fantastic. So sensitive was he with the controls I imagine he would be a good modern day gamer.

I kept the lifts to minimun … Two turnovers, one lift on the low loader and one for installation in situe.

The piece started on its side to give me decent acess to work the initial arch form. I could not contemplate starting it upside down with the sense of the the weight of the two ends working against a more vulberable middle section.

So, on its side we did as much work as possible, flipped it over for access to the other side and finally stood it up and that is where it remained. Working the other side, a now vertical face, was a little awkward but safer. Taking a view though, trying to carve the branches the disappear into the form and appear elsewhere, lining them up properly, getting your hands and tools into near impossible crevices was awkward what ever way up the stone was but I did not start to do the serious piercing through until the stone was upright.

As the images suggest the turning process can be a brutal one so as much care and attention you can give to mitigate sharp jerking or twisting forces is essential. I could list all those measure here but if you are not bored by now you would be after three more pages no doubt.

By far the most stressful part of the job was from the day the now 9 ton piece was lifted on to the low loader and left my custody for the journey to Nottingham, until, it was upon its legs in situe. I followed the lorry all the way cringing at every lump and bump and sharp turn the vehicle encountered. It was only two hours from Cambridge but it felt like a lifetime.

The nature of a small company is such that if anything goes wrong with a project like this you pay for it financially and with reputation and it will finish you. So everything is riding on it.

Well, the installation went well. I designed a system that would effectively lift the piece from its feet to avoid stresses within the structure. It worked well. A litlle work as expected carving in the forms  across the joints, and all was well.

Fountains have their own technical difiiculties but pale into insignificance compared to the logistics of Embrace. With Embrace finished and complete sucess the pressure was off and  the fountain was a joy. It was carved in sections out of a sandsone called Watts cliffe lilac from Chesterfield, and the leaves carved in relief are stylised forms of medinal plants. The ‘ mortar ‘ in the centre was from bronze. The ‘mortar design reflected an aspect of the pharmaceutical industry and was a conveinient water vessel. It was carved in stone, the overhanging leaves as spouts in plaster first, then, molded, and finally cast in Bronze at Pangolin. This process retained the texture of the chisel marks on the original stone maqutte.

Hopefull the images illustrate the story.