Wow 100 meters of wavy lines integrated with leaves and fish. A very interesting project. The big issue with a project like this is the possible monotony. Do two of us want to carve 50 meters each, how long will that take, does the deadline allow for that? 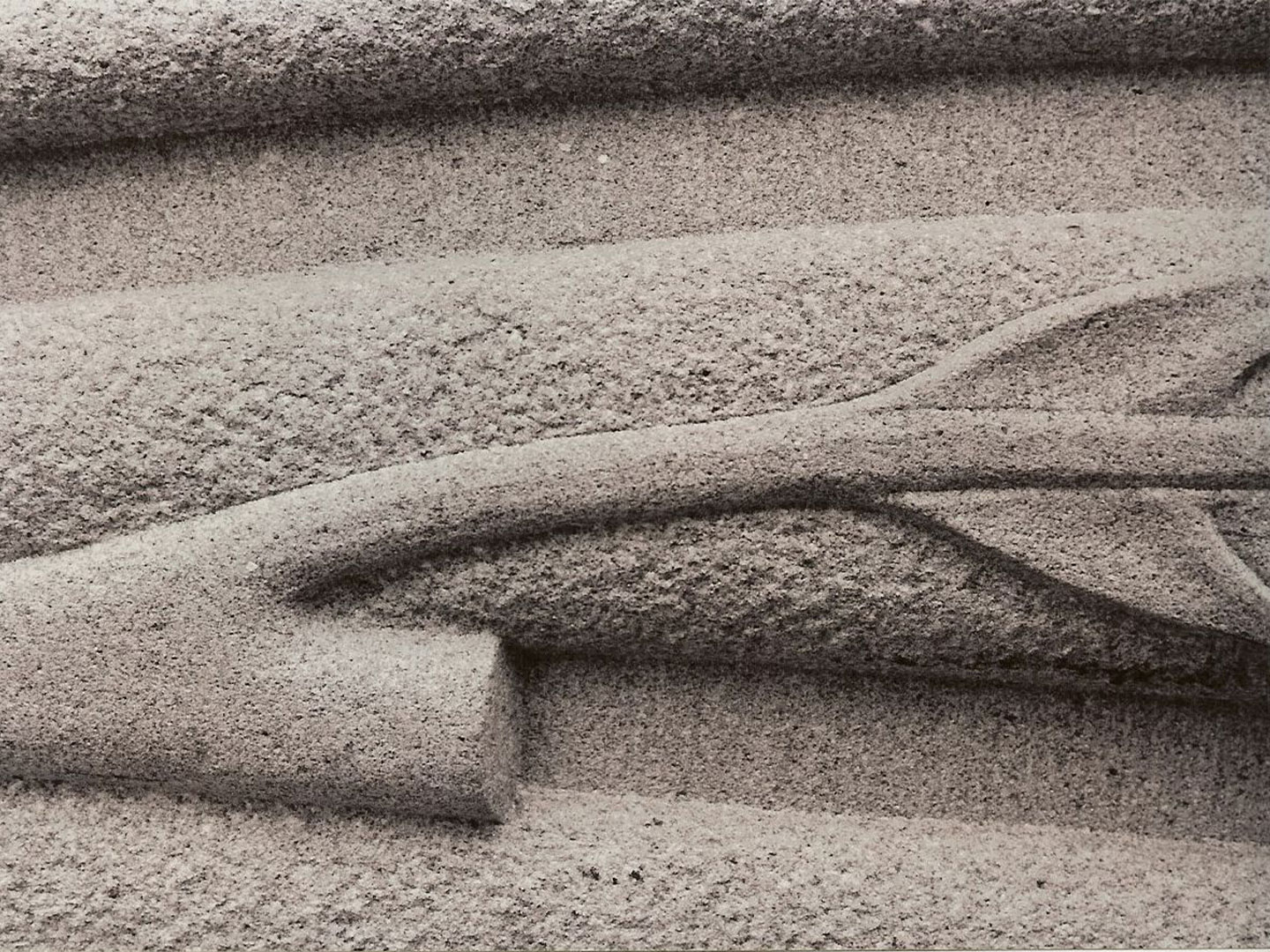 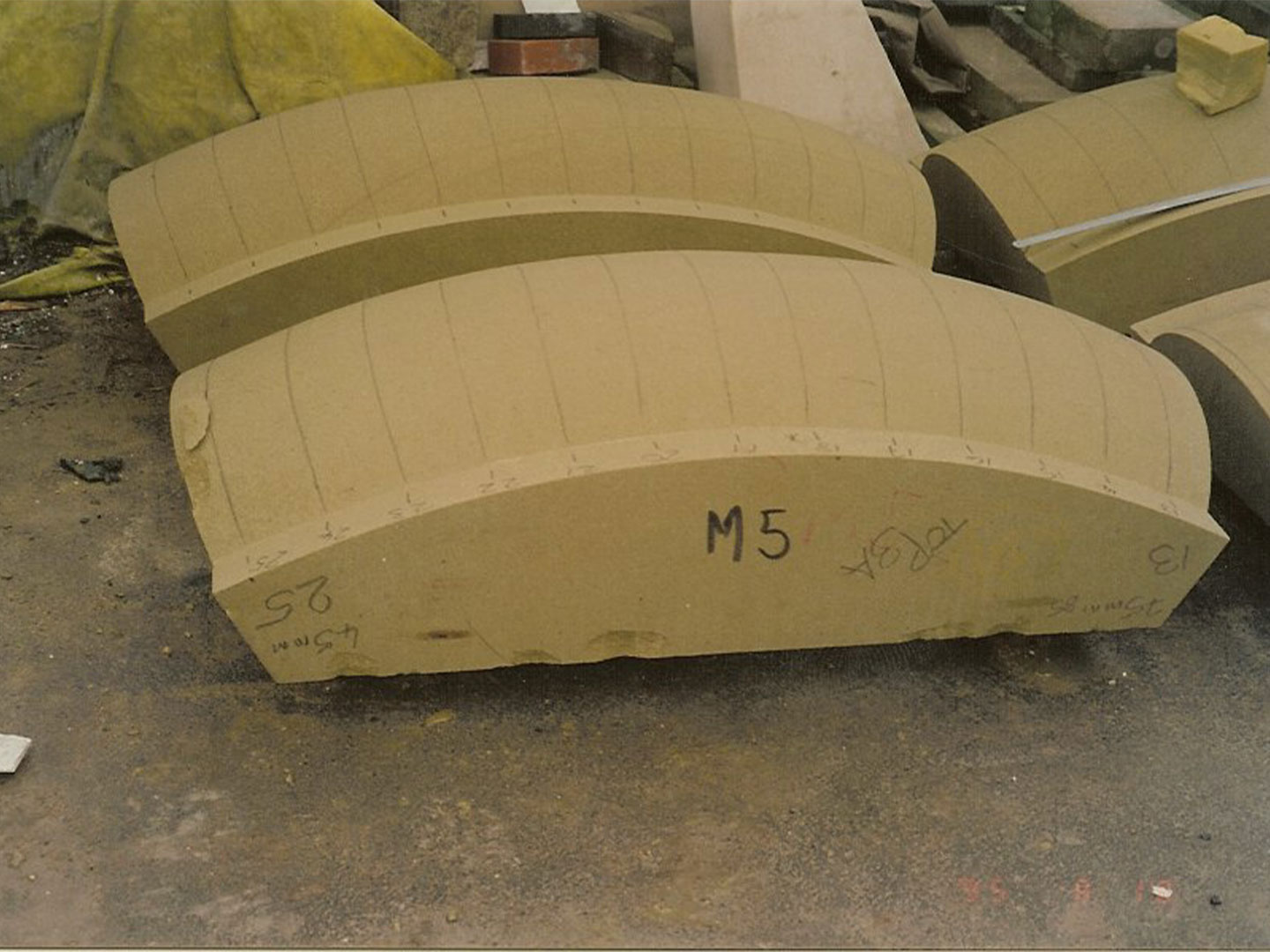 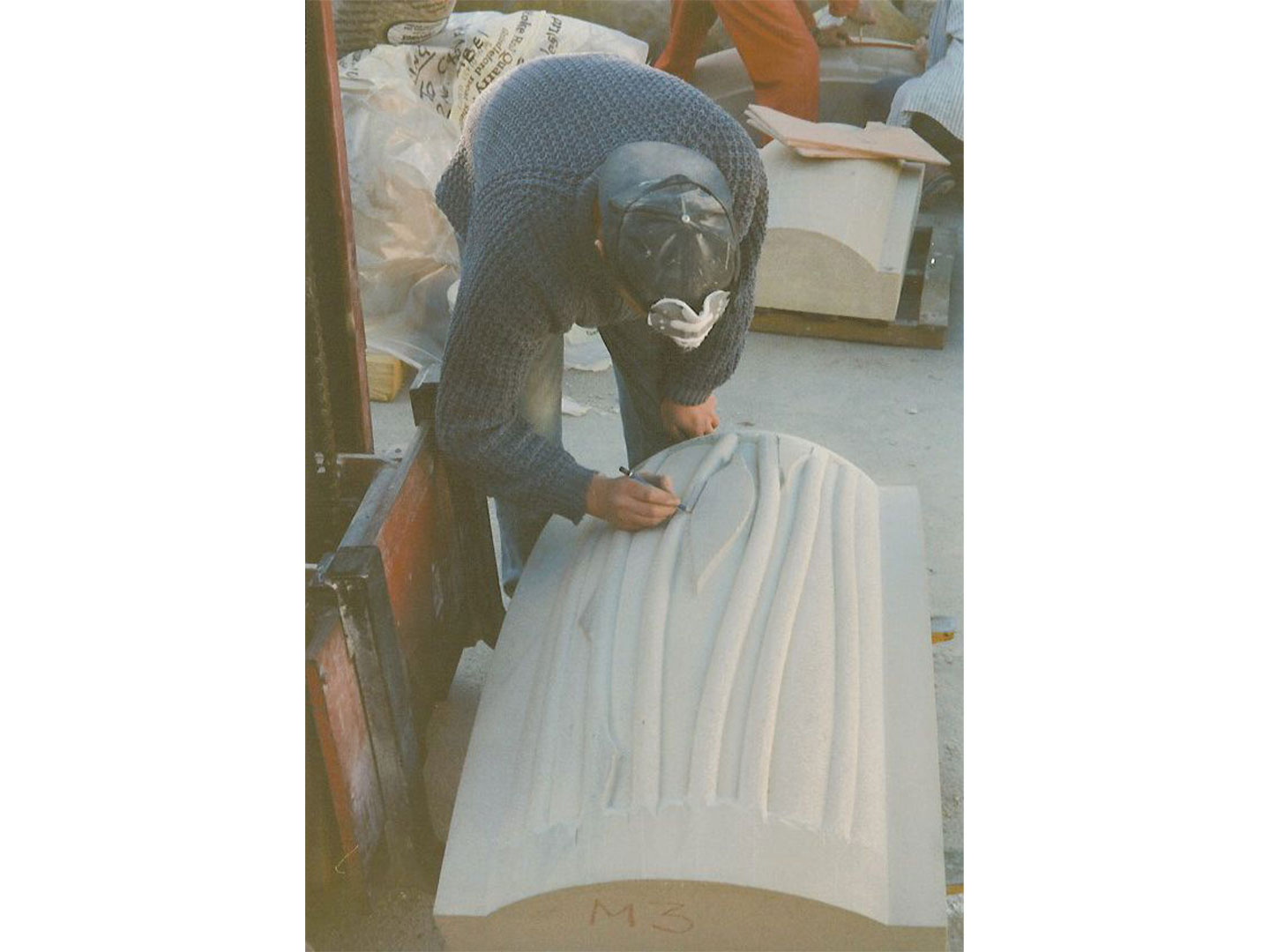 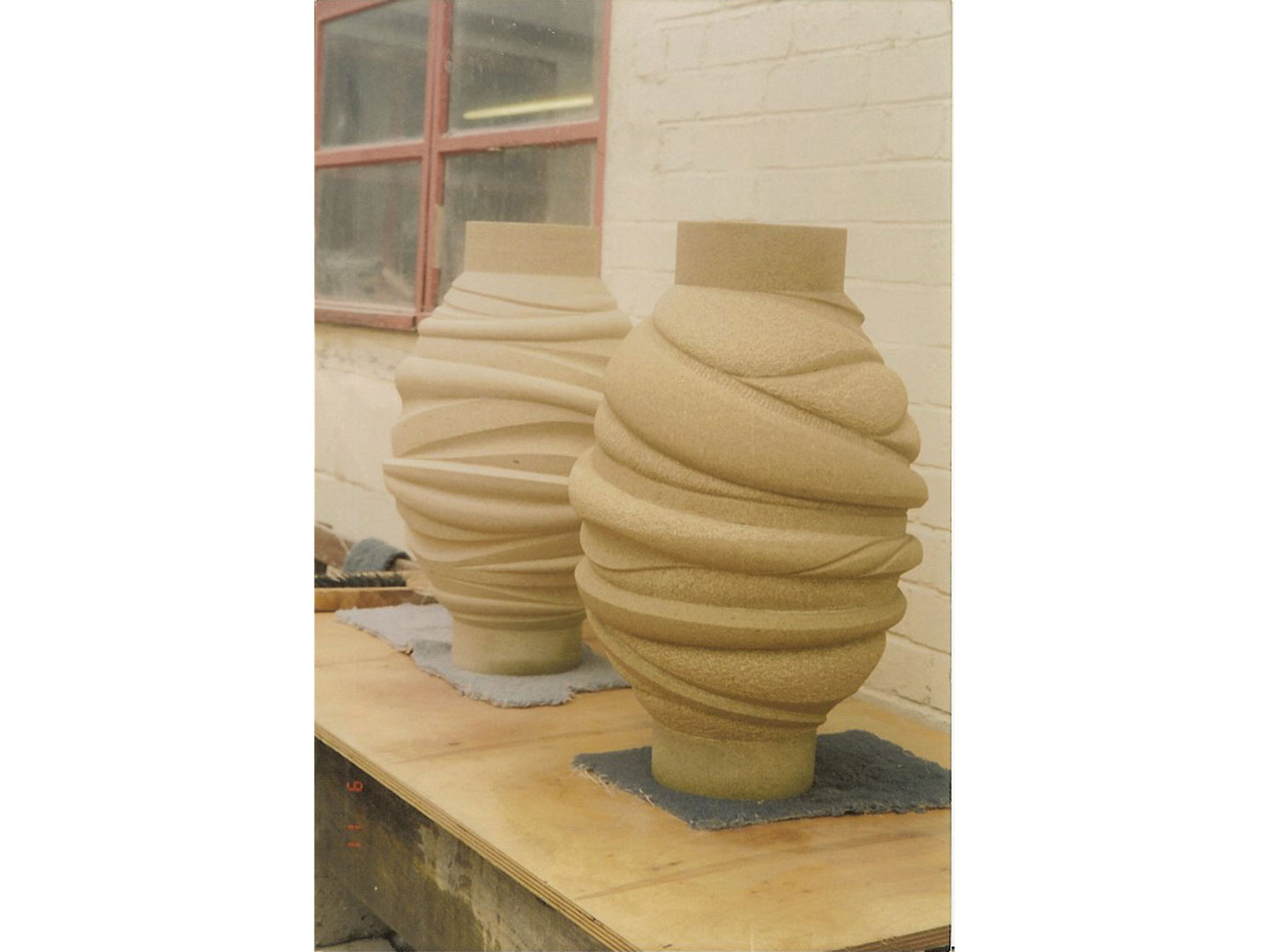 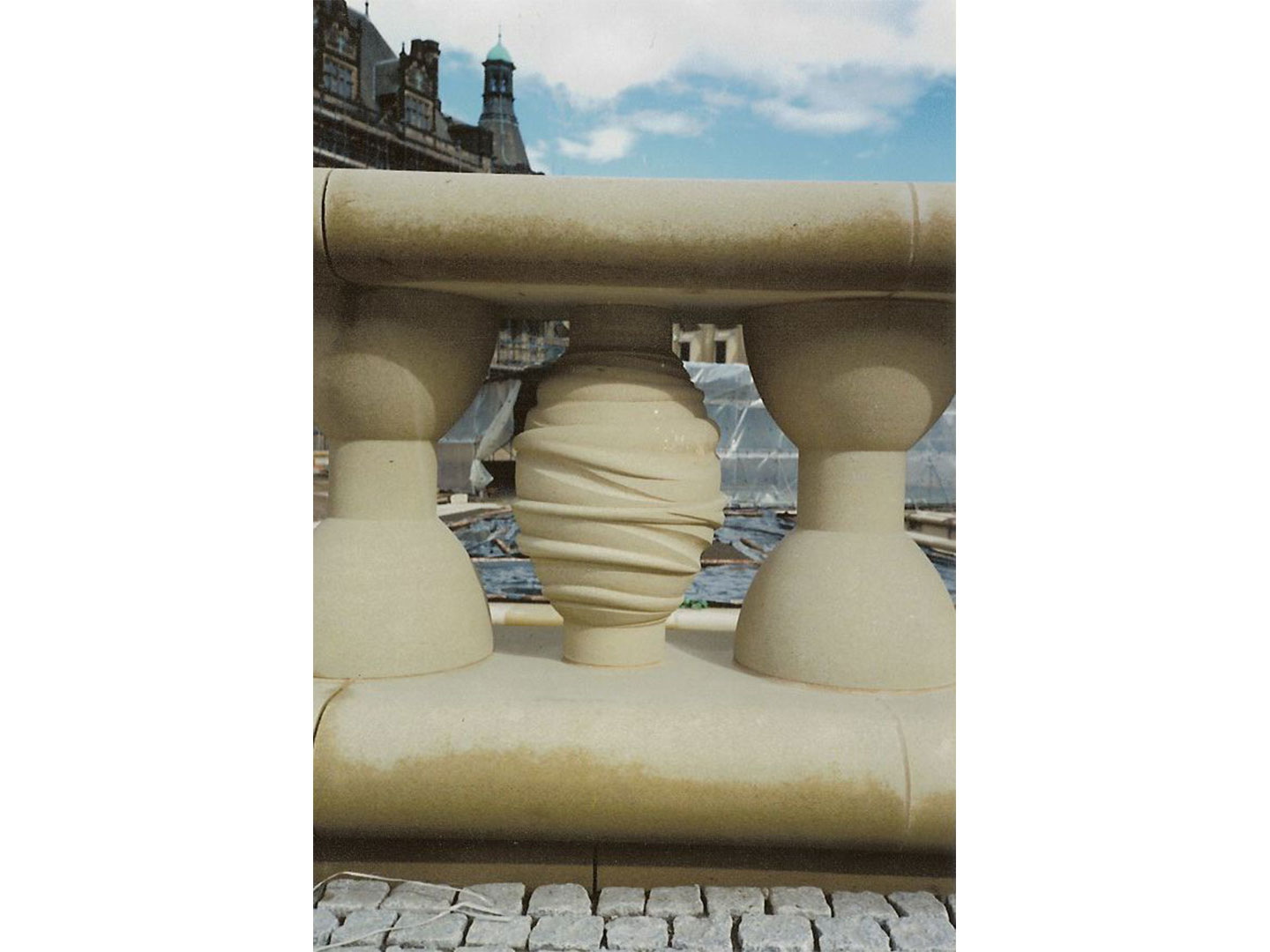 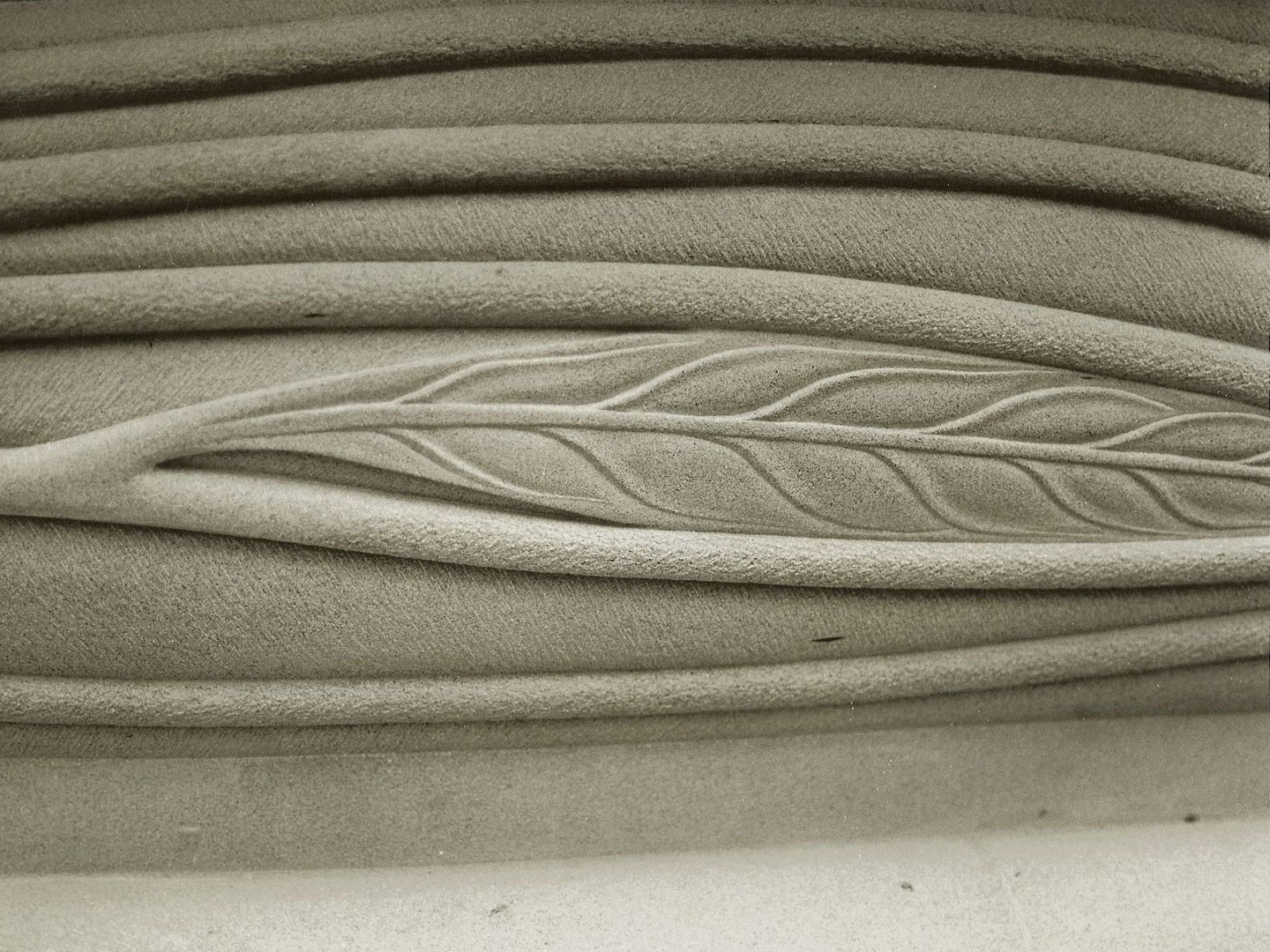 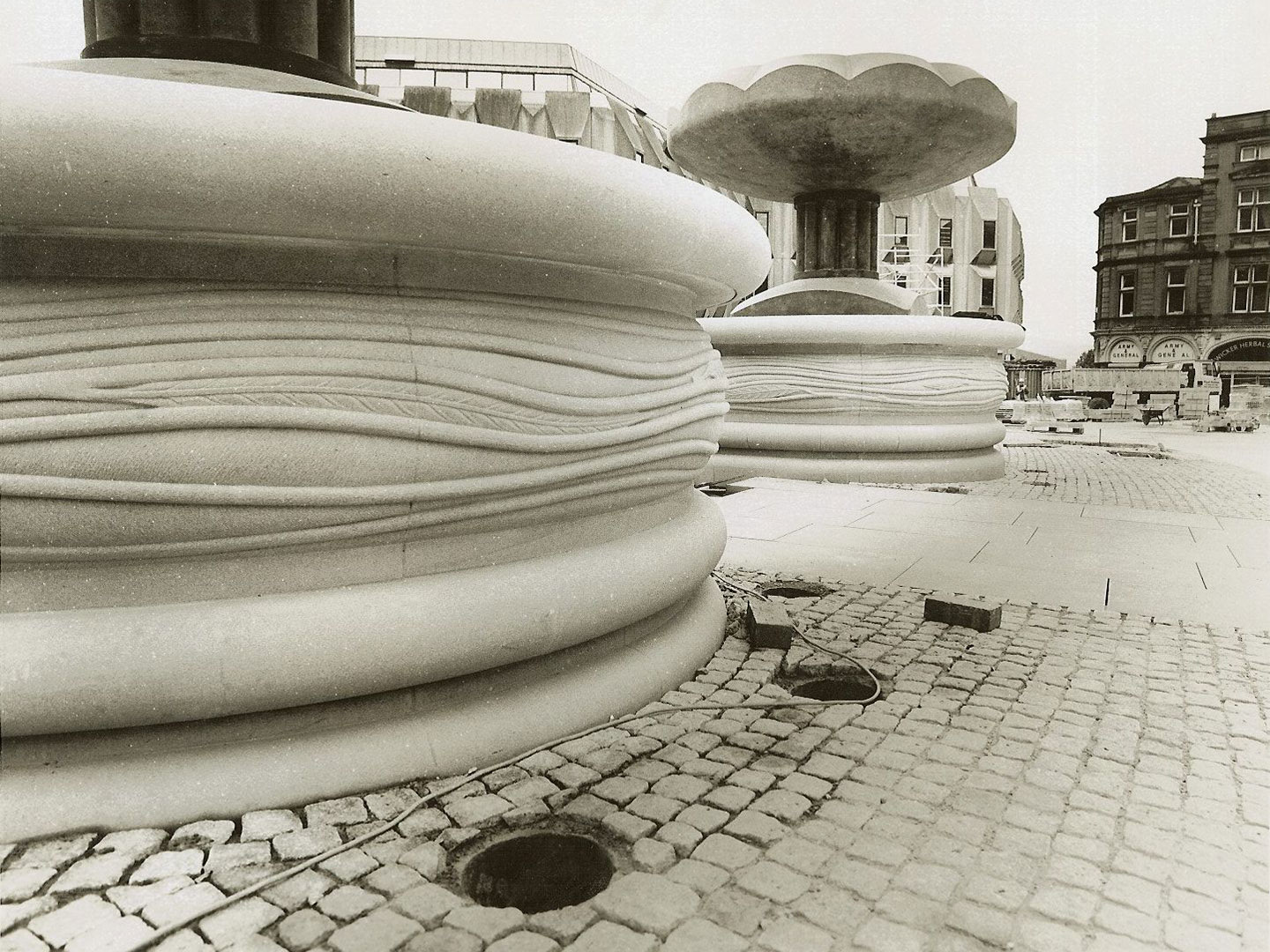 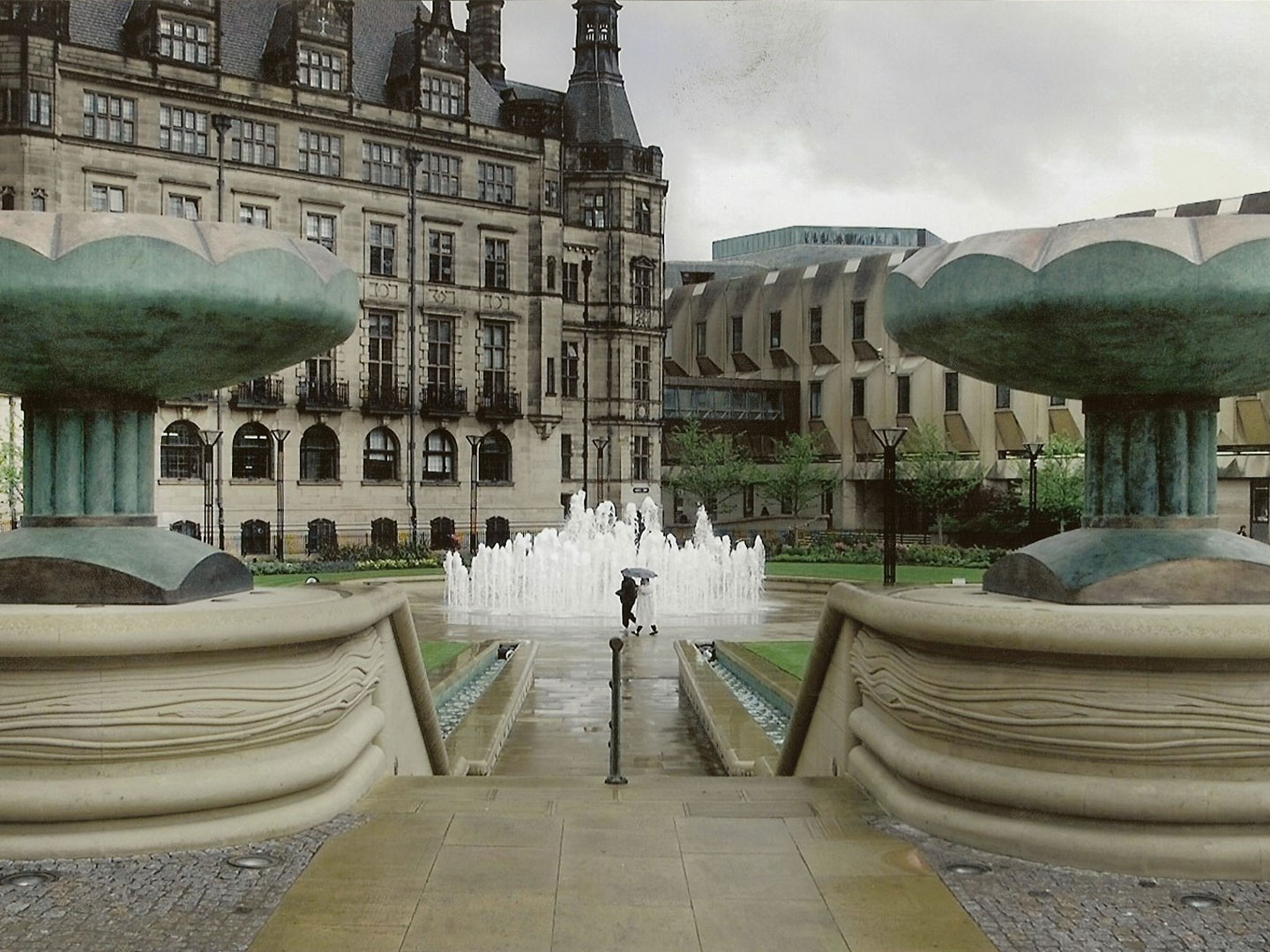 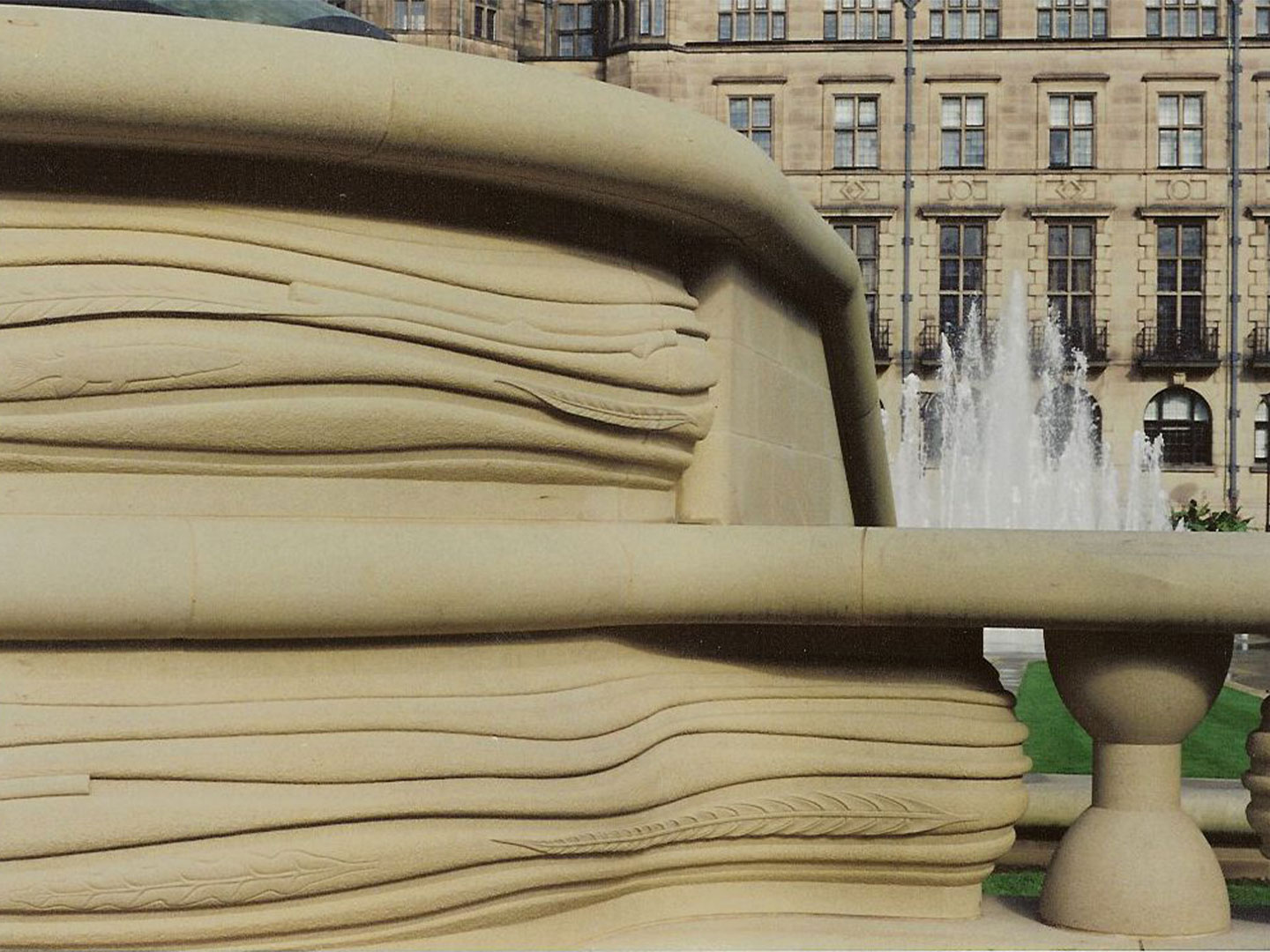 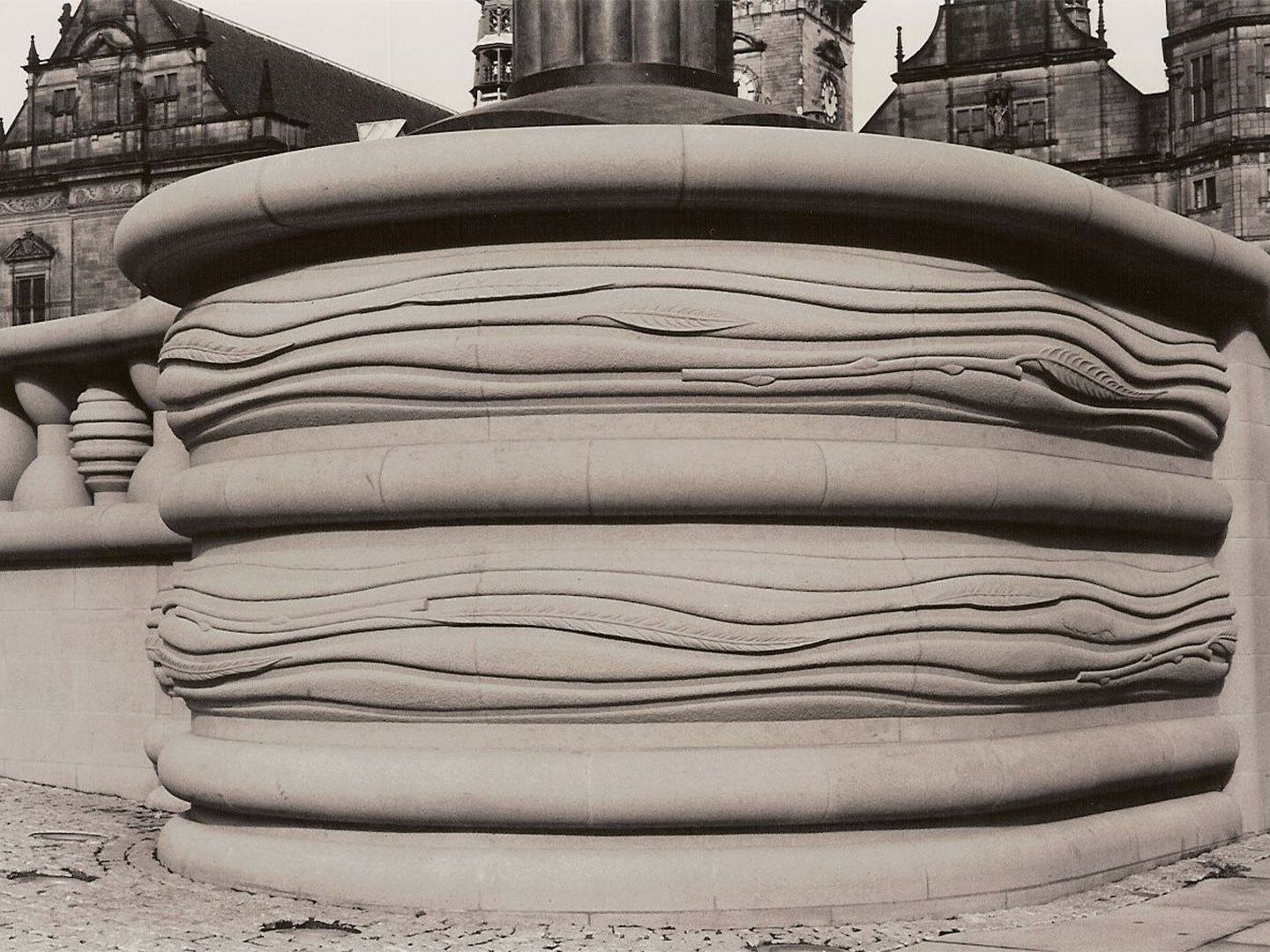 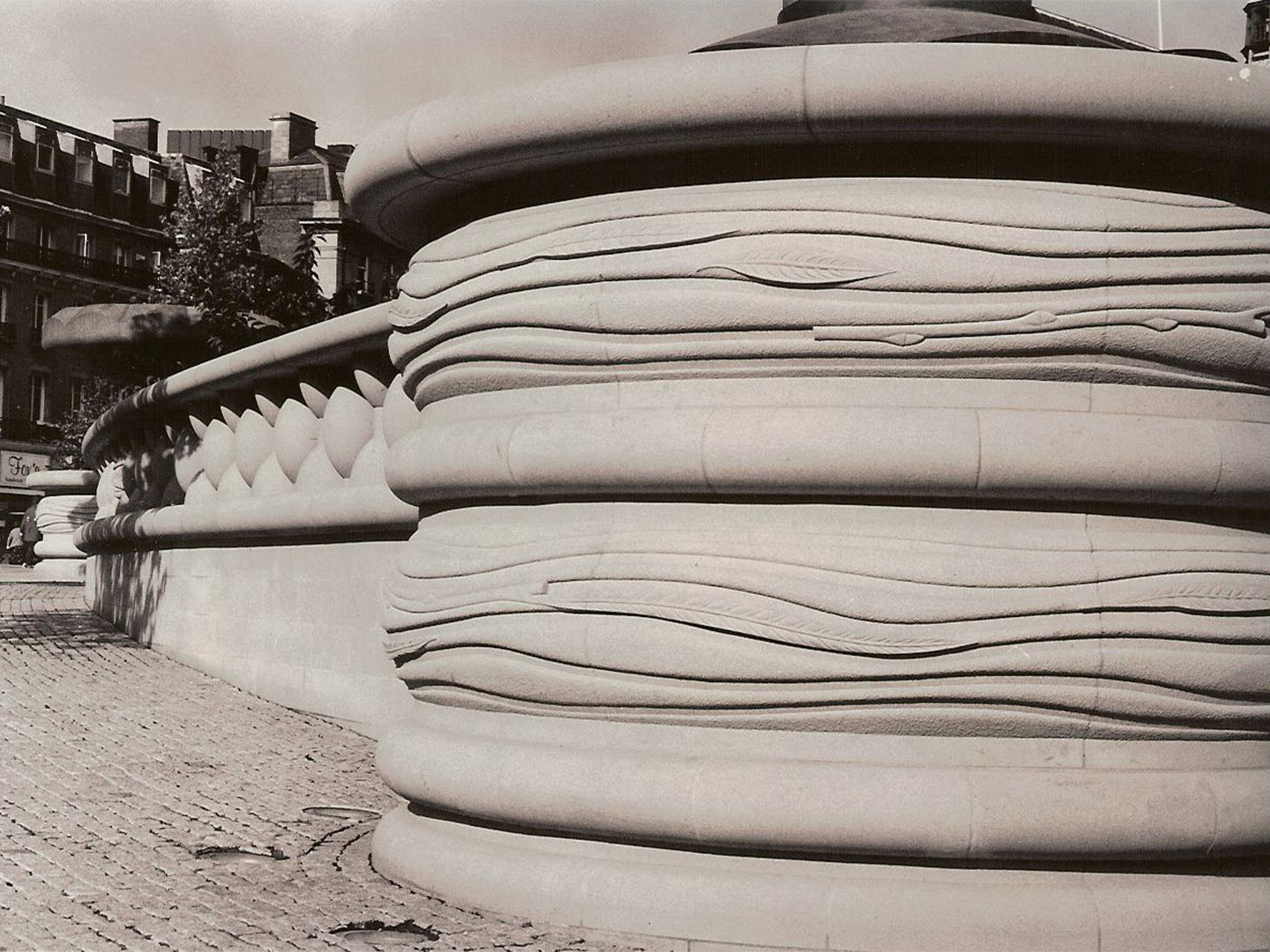 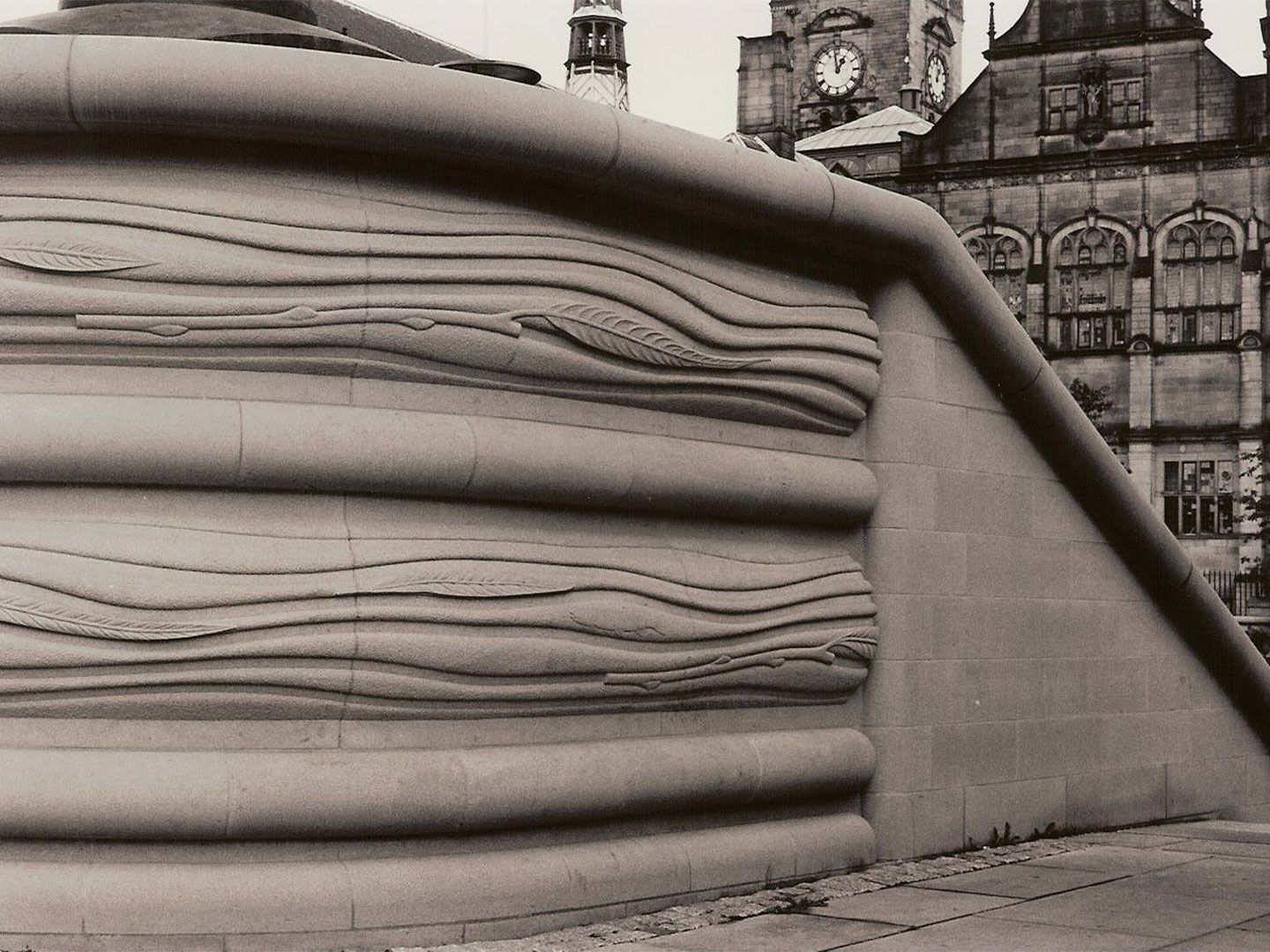 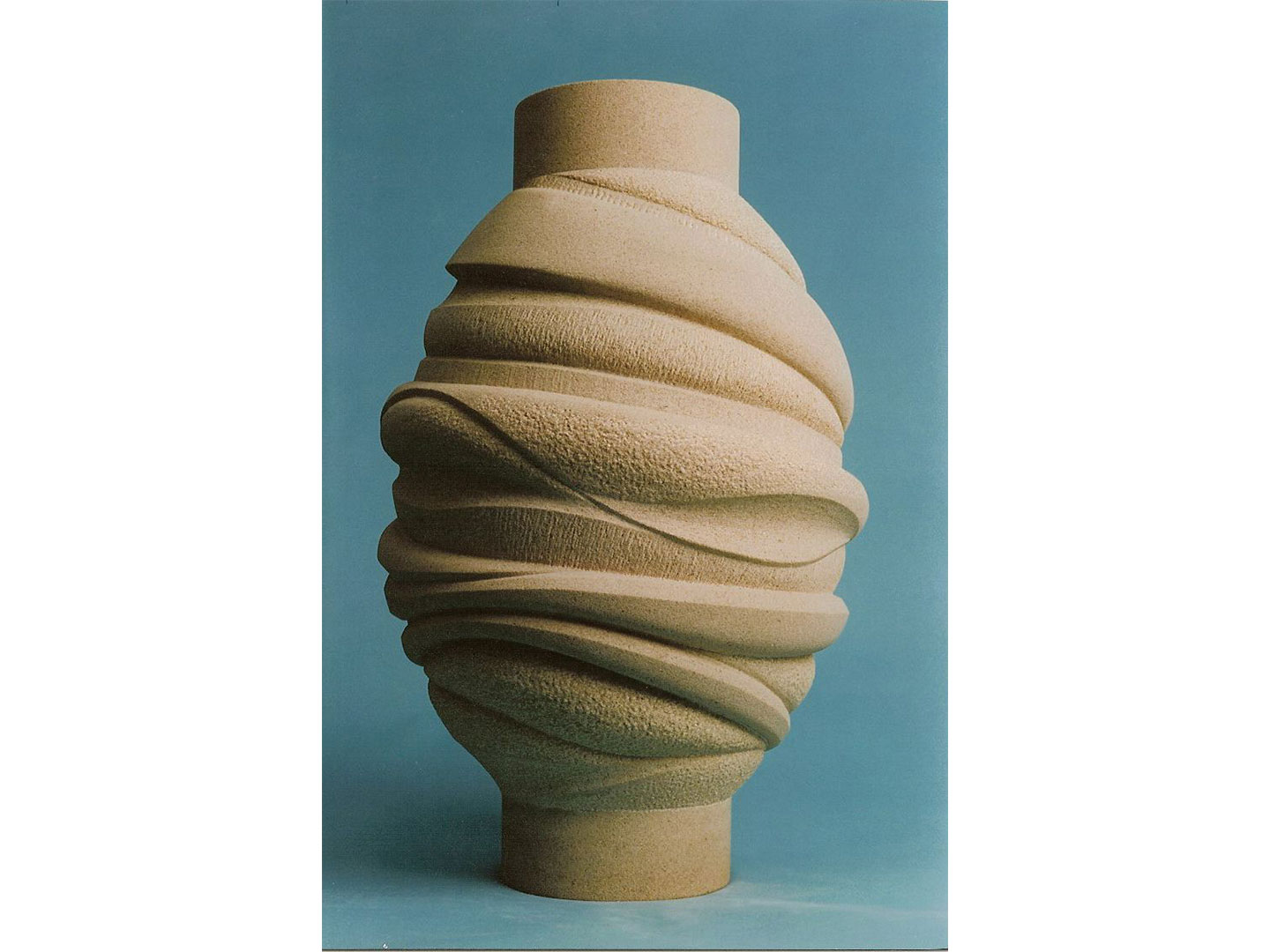 Monotony would be an issue and the deadline would not allow the hours that only two people could muster.

So , easy solution, Form our usual team relevant freelance craftspeople and divide the task. I think we had about 18 meters each in the end.

Again the stone was a very durable sandstone. The main issue with this project is maintaining consistency between all the hands involved. To minimise differences  each artisan is issued with the same tools types rather than bring their own, which is a dangerous recipe for divergence of style, and the setting out was overseen by myself.

The wavy pattern did repeat every couple of meters but the the raised and sunk surfaces within the detail of each large base differed.

Another difficulty was that the pattern did not intersect the joints consistently as the stones were of differing lengths. In order to mark these stones out I developed a system that was usable by all but I oversaw the setting out process of all stones alongside the craftsperson in order to relieve them of the responsibility. It also relieved us of the arduous task of lining every stone up with its neihbour In order to check alignment. Yes the stones were very easily manoeuvrable with our walk behind forklift, approx half a ton each. However there were about 50 of these stones and in such circumstances you have to apply sensible logistics in order not to clutter your working space or get in each others way when changing over completed stones for new ones.

One important consideration here is that we were not installing the pieces. You never know who is charged with this task at the start of the job but I always preferred to install or own work. Are they competent ? Turned out they were very competent. But you have to make allowances regardless.

To mitigate any risk of these stones ending up misaligned I decided to live 100mm at each end of the stones uncarved … blank. This had the advantage to the installers of not having to worry too much about the alignment of details, but mainly, I knew that 200mm …… 100mm blank, each side of the joint, was plenty of distance to ensure the pattern flowed perfectly through the joint. Obviously this would achieved post installation and would be a great opportunity to live for a while in the city that effectively is paying you . A part of any project that I really enjoyed.

Our B&B of choice on this occasion was the Rutland arms.

Those that lived in Sheffield at the time will remember the project was completed in two stages. The first stage completed three quarters of the peace garden and the fountain. The second stage involved the demolition of the council offices affectionately known as the ‘egg box’ in order to build the winter gardens and complete the peace gardens. So, we were allowed a second visit to complete our task.

Again, careful management, anticipating bottlenecks and possible disasters and the separation of the political and financial dynamics in order to focus and create is the common theme in these projects.

As a footnote … The atmosphere in the workshop undergoes subtle changes depending upon the nature of the work. For example the repetitive nature of the long term job filling the space is fertile ground for a lighter hearted atmosphere. Muscle memory takes over on repetitive tasks and once the stones are marked out it is just a question of accurately following a line. The mind is then given leave to wander a bit, and, well let us say, with everyone in the same boat, the banter gets lively.

When the workshop has many varied smaller projects going on people generally focus more, the mind is concentrated and occupied, as it should be and sharp wit is surpressed a little.